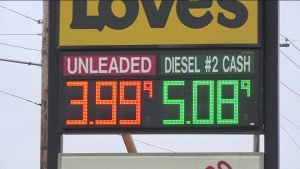 Pilot Flying-J and Love’s said there are diesel supply issues, and the companies are monitoring the situation closely. As it worsens, and the supply of diesel fuel dwindles, the cost to purchase that fuel rises and the impact is being felt on truckers all across the country.

This nation’s food supply and much of the service industry hinge on truckers’ ability to deliver goods. Several trade publications say diesel supplies on the East coast are now at the lowest in almost 20 years. “I’ve seen fuel prices when I started out, a dollar something a gallon and we were squalling even back then. Now 5, 6, 7, 8, 9 dollars a gallon, it’s ludicrous, it’s out of hand, it’s going to drive the trucking industry out,” said Bart Costi, who has been a truck driver for decades, according to WDBJ7, a CBS news affiliate out of Roanoak, Virginia.

Some have even been warning of diesel rationing beginning as early as summer for areas such as the East Coast.

Diesel Prices Continue To Soar As Shortage Worsens, Rationing Could Be Next

Diesel prices and shortages will impact every single aspect of everyone’s daily lives. Farmers need diesel fuel to harvest and even get the land ready for planting. A rise in prices will result in a rise in the cost of food. Everything is going to be more costly and if fuel rationing begins, you can expect the food supply shortages we are already experiencing to expand as truckers have to cut back on how much they can drive their trucks because they simply cannot fuel them.

The commodity fuels much of the economy, including big-rig trucks, farm equipment and industrial machinery. Prices hit a record $5.56 per gallon in the US, up 76.5% from a year ago. –Business Insider

This is a “perfect storm” of problems and if you don’t have enough food stockpiled, you should be learning and trying to grow whatever you can to be as self-sustaining as possible. This is going to impact the already hard-hit food supply and by the time the majority of the country figures it out, it will be too late.

The post Truckers Feel The Weight Of Diesel Prices As Shortages Loom first appeared on SHTF Plan – When It Hits The Fan, Don’t Say We Didn’t Warn You.