About 14 years ago, I narrated this video about the flat tax and national sales tax (sometimes referred to as a “Fair Tax”).

I used the video as an opportunity to explain that both plans effectively rip up the current internal revenue code. And both would solve the major problems that plague today’s income tax. 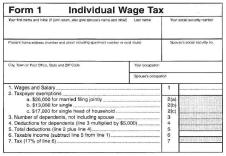 As I stated in the video, the only big difference between a flat tax and national sales tax is the collection point.

Sadly, big-picture tax reform no longer is a major issue. Proponents of good policy are mostly focused today on stopping plans that would make a bad tax code even worse.

But maybe it is time to think about going on offense.

In a column for the New York Sun, John Childs makes the case for replacing the current mess with the national sales tax.

There is a better way — replace the entire income tax monstrosity with a national consumption tax, i.e. a national sales tax. Let Walmart and Amazon be the tax collectors. Odds are they will be vastly more efficient than the IRS,

which at this point can’t even return the phone calls of bewildered taxpayers. All retailers already perform sales tax collection services for state governments. So it is hardly a leap of faith to ask them to do it for the Feds. …This would be bad news for tax lawyers and accountants. As some of the brightest minds in the country now devote themselves to crafting fiendishly clever tax avoidance schemes, though, imagine what an unexpected dividend would flow from redirecting all of that creativity to productive activities.

I agree that a national sales tax would be much better than the current system.

That’s why I’ve promoted the idea on many occasions.

But always with the very big caveat that I mentioned in the video, which is that any sort of direct consumption tax (sales tax, Fair Tax, value-added tax) has to be a total replacement for the income tax.

However, that’s just one must-have requirement. Since politicians are untrustworthy, we also should not allow a direct consumption tax until and unless the 16th Amendment is repealed

and replaced with a new amendment that unambiguously prohibits any future Congress from reinstating an income tax.

The bad news is that I don’t think either of these requirements will be met. And this is why I am more focused on supporting the flat tax.

After all, the worst thing that happens with a flat tax is that future politicians reinstate the current system.

But the worst thing that happens with a national sales tax is that future politicians have a new source of revenue to fuel bigger government (sort of what happened in Europe when value-added taxes financed a major expansion in the burden of government spending).

P.S. The same principles apply at the state level. Policymakers should use consumption taxes to help finance the repeal of income taxes.

P.P.S. A Fair Tax (or any form of national sales tax) will reduce the underground economy, but not by a greater amount than the flat tax.

previousDfinity Slaps Meta With A Lawsuit For ‘Copying’ Its Infinity Logo