I wrote back in 2012 that California voters opted for “slow-motion economic suicide” by voting to raise the state’s top income tax rate to 13.3 percent. 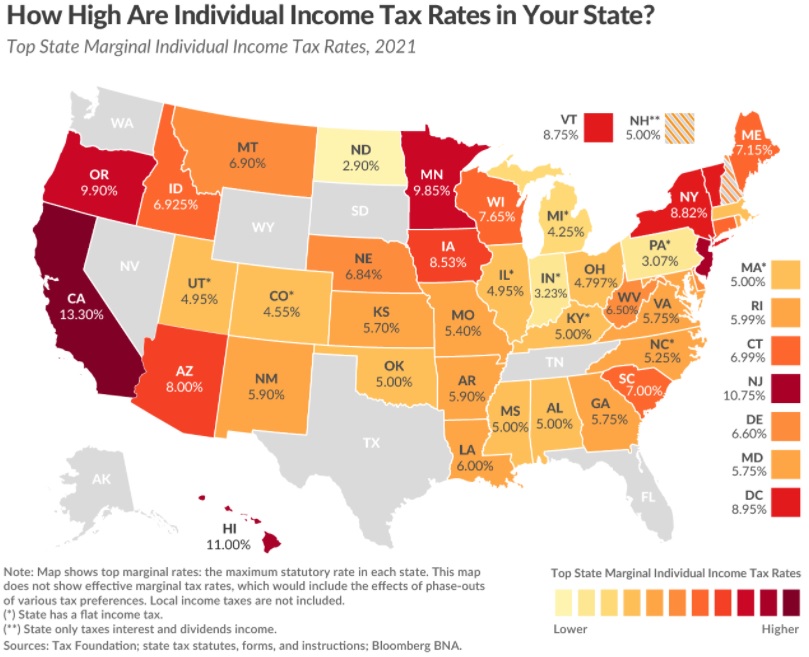 Sure enough, having the nation’s highest state income tax rate has been bad news.

More and more companies and households are leaving the (no-longer) Golden State for zero-income-tax states such as Texas, Nevada, and Florida.

Unfortunately, it appears that California politicians aren’t learning any lessons from this exodus.

They’re now pushing for a massive tax increase to fund a government takeover of health care.

The Wall Street Journal opined about the new plan.

California Democrats are busy reviving government-run, single-payer health care, despite its failure in the state five years ago. …Their revived legislation would replace Medicare, Medicaid and private health insurance with a state-run system… Californians would also be entitled to an expansive list of benefits including vision, dental, hearing and long-term care. A board of bureaucrats would control costs—i.e., ration care.

…While Californians would technically be entitled to a “free” knee replacement, they might not get one if bureaucrats consider them too old—but the state won’t let people know that’s the reason. …Arizona could soon become a hot destination for medical tourism. …As for the tax increases… Start with a 2.3% excise tax on business with more than $2 million in annual gross receipts… Employers with 50 or more workers would also pay a 1.25% payroll tax, which would be passed onto workers. Workers earning more than $49,900 would pay an additional 1% payroll tax. …would raise the effective income tax on wage earners making more than $61,213 to 11.55%—more than millionaires pay in every state but New York. …An additional progressive surtax would start at 0.5% on income over $149,509 and rise to 2.5% at $2,484,121. …The top marginal rate would rise to 15.8% on unearned income, including capital gains, and 18.05% on wage income.

In a column for Reason, Joe Bishop-Henchman and Andrew Wilford of the National Taxpayers Union explain the likely impact of the proposed tax increases.

As the mad scientist laboratory for bad tax policy in America, California is constantly striving to come up with poorly designed and harmful taxes to pay for ever-increasing spending. But even by its own lofty standards, California has truly outdone itself with its latest proposal to fund a state single-payer health care system. …Not only would the proposed $163 billion in new tax revenue nearly double last year’s total revenue for the tax-happy state,

but California would structure these new taxes in such a way as to be even more harmful than doubled tax liabilities already imply. …the 2.3 percent gross receipts tax sticks out. …whether a business has a profit margin of 0.1 percent or 10 percent, it would still have to pay the same percentage of its total revenues. …a rate that is three times the level of the nation’s current highest. …the proposal to institute a payroll tax on businesses with 50 or more employees…would create an obvious disincentive for businesses to hire their 50th employee. …the payroll tax would discourage both hiring employees and paying them higher wages, a disastrous outcome for workers. …individual income tax rates…would effectively be…an 18-bracket tax structure with a top marginal tax rate of 18.05 percent. …a trend that California appears to have its head in the sand about: overtaxed businesses and individuals fleeing for greener pastures.

Let’s elaborate on that final sentence and ask ourselves what the tipping point will be for various taxpayers.

In other words, California already is in trouble and many state politicians now want to double down on a losing bet.

P.S. California considered a government-run health plan a few years ago and backed off, so maybe there’s hope.

P.P.S. Illinois has been the long-time leader in the poll that asks which state will be the first to suffer political collapse. That may change if this California plan is enacted.

P.P.P.S. When I’m feeling petty and malicious, I sometime hope jurisdictions adopt bad policy because that will give me more evidence showing the adverse consequences of bad policy.

previousCDC Director: “What Vaccines Can’t Do Anymore Is Prevent Transmission”