Regarding fiscal policy, almost everyone’s attention is focused on Biden’s growth-sapping plan to increase the burden of taxes and spending.

People are right to be concerned. If the President’s plan is approved, the already-grim fiscal outlook for United States will get even worse.

This battle will be decided in next 12 months, hopefully with a defeat for Biden’s dependency agenda.

Regardless of how that fight is resolved, though, we’re eventually going to get to a point where sensible people are back in charge. And when that happens, we’ll have to figure out how to restore the nation’s finances.

That requires figuring out the appropriate goal. Here are two options:

These are both worthy objectives.

But, as a logic teacher might say, they are necessary but not sufficient conditions.

Here’s a chart showing how a policy of low taxes (the orange line) presumably enables faster growth, but also creates the risk of an eventual economic crisis if nothing is done to control spending and debt climbs too high (think Greece).

By contrast, the chart also shows that it’s theoretically possible to avoid an economic crisis with higher taxes (the blue line), but it means less growth on a year-to-year basis. 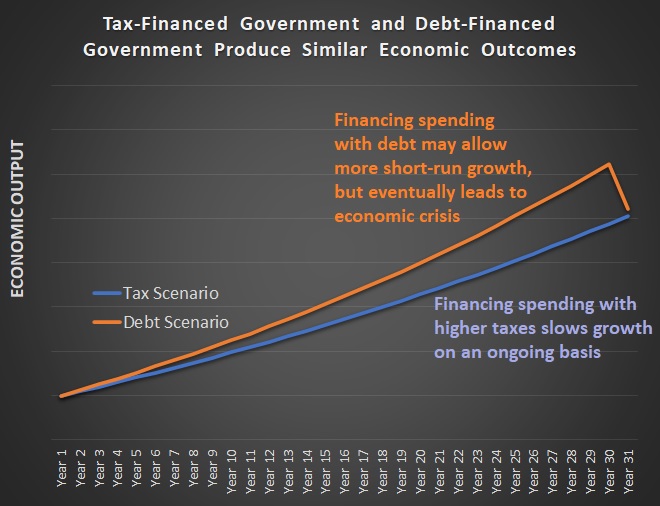 Which is why we should consider a third goal.

The economic benefits of this approach are illustrated in this second chart. We enjoy faster year-to-year growth. And, because spending restraint is the best way of controlling debt, the risk of a Greek-style economic crisis is averted. 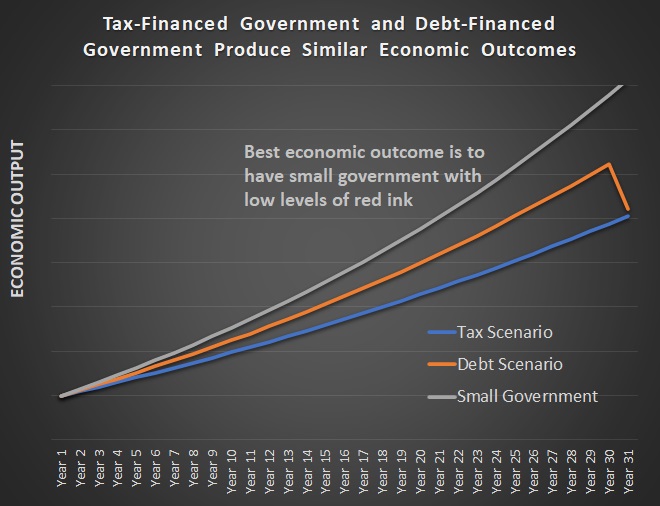 Now for some caveats.

I made a handful of assumptions in the above charts.

Anyone can create their own spreadsheet and make different assumptions.

That being said, there’s a lot of evidence that higher tax burdens hinder growth, that ever-rising debt burdens can lead to crisis, and that less government spending produces stronger growth.

So feel free to make your own assumptions about the strength of these effects, but let’s never lose sight of the fact that spending restraint should be the main goal for post-Biden fiscal policy.

next“This Is Such Garbage You Guys Print”