Earlier this year, extrapolating from a study by the nonpartisan Congressional Budget Office, Robert O’Quinn (former Chief Economist at the Department of Labor) and I authored a study on the economic impact of Biden’s fiscal plan. 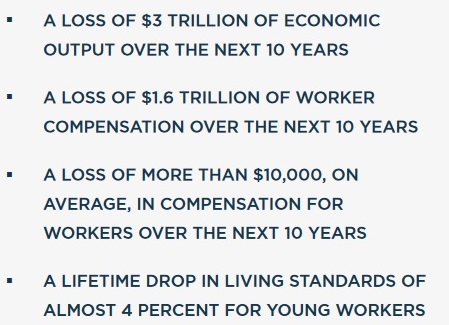 The results are not pretty.

But those estimates were based on the parameters of Biden’s economic plan in the summer.

His agenda has since been modified, which raises the question of how the current proposal would affect economic performance.

According to independent experts at the Committee for a Responsible Federal Budget, the actual cost of the president’s policies is closer to $4.9 trillion. Some of this new spending will be financed with red ink, but President Biden also has embraced higher tax rates on work, saving, investment and entrepreneurship.

Indeed, if his plan were enacted, the United States would have both the highest corporate tax rate and the highest capital gains tax rate in the developed world. …But how much would the economy be hurt? There are groups such as the Tax Foundation that do excellent work measuring the adverse effects of higher tax rates. But it’s also important to measure the harmful impact of a bigger welfare state. …Based on that CBO study, and using the CBO fiscal and economic baselines, we calculated the following unpalatable outcomes if Build Back Better bill (pushed by the president and Democrats in Congress) becomes law and growth is reduced by 2/10ths of 1 per cent per year.

And here are the results.

The good news is that the latest version of Biden’s plan doesn’t do quite as much damage as what was being discussed earlier this year.

The bad news is that our economy will be much weaker (and our results are in line with other estimates, including those done before the election and since the election).

Not that we should be surprised. If the United States becomes more like Europe, we’ll be more likely so suffer from European-style anemia.