The Crypto Market Seems to Have Hit Bottom… for Now

Did Arizona Introduce A Bill To Make Bitcoin Legal Tender? This Is What We Know

A Decentralized Autonomous Organization (DAO) called ConstitutionDAO pooled over $46M to put “The Constitution in the hands of The People” by buying a rare first printing of the U.S. Constitution during a Sotheby’s auction. But even though the raised a higher sum than the winning bid, they lost the auction.

The project became a group of 17,437 contributors that, in just a few days, raised more than double the price Sotheby’s had estimated. The sale, however, ended at $41M in the hands of another bidder.

Around 20% of contributors reportedly made a crypto transaction for the first time, just to join in. There were no expectations of profit, only big ideas, humor, transparency, and a record-breaking experience. ConstitutionDAO intended to use the self-governance that web3 offers to allow contributors to take decisions around destination and preservation. 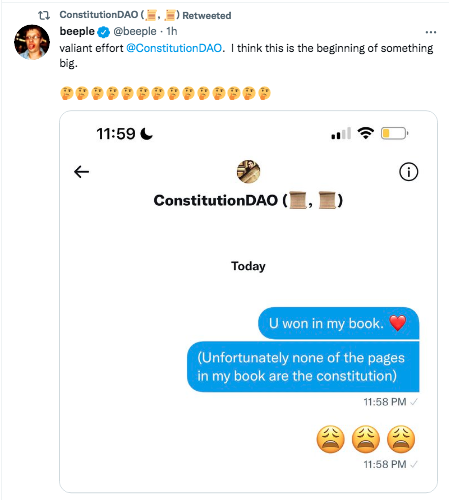 The Dao claimed on Twitter that they broke records for the largest crowdfund for a physical object, most money crowdfunded in 72h, became the first DAO Sothebys has ever worked with, raised interest in crypto inside diverse groups of people, and spread education.

How Did Constitution DAO Lose The Bid?

Although ConstitutionDAO raises more than 41M, Sotheby’s standard seller’s commission is “10% of the hammer price”, plus taxes, plus ETH gas fees, we can begin to see what they struggled with.

Furthermore, a significant part of the reason was the responsibility the group assumed towards the conservation of the document. The group members carefully investigated the path to follow for its preservation given they won the auction and ended up calculating a sum needed for its “proper care and maintenance”.

But Why Would Someone Buy Something They Cannot Have?

The main idea of the DAO was that “historic artifacts are meant to be shared and enjoyed”, not owned by private parties, but some users did not understand their vision and called it “spending money to have nothing”.

The average donation that was given to the project was $206,26. One could write a long list of material items that one could buy for that price, sure, but how often do you get to test the limits of what a group of people can achieve in just a few days by following a shared vision?

Of course, people like the idea, in a very American way, of buying the U.S. constitution off a private entity as a manifestation of their freedom. And, of course, we all know that this would not have meant actually buying the constitution itself -that would have probably resulted in an opposite and dystopic concept.

But this project goes beyond that. It is about the goals many merely dream to achieve. It is about self-governance, empowerment, democracy, an open-ended response to the question What can we do?

And we can dive in deeper:

How free do Americans actually feel? Can the American dream be found inside of ICE concentration camps? Student loans, inflation, homelessness, hate crimes, little chance of affording a home, poor health care, and more, and then, freedom, or the promises of the land of the free.

We could also debate that freedom comes within and that any given man could surprise himself one day acknowledging it while turning around a corner or even in the confinement of a prison.

Is the nature of the decentralized autonomy of crypto communities a call to recognize one’s voice of freedom? Is it the human urge to share something, to build alongside others? Is it an experiment to see whether we can reproduce our own model of democracy? We shall spend the following years seeing how this or other groups in the crypto world lead us to some answers and many more questions.

The Smithsonian briefly explains on their educational website that “It is because of the contest and conflict they embody, and the way they combine use and meaning, that [historical] artifacts are such valuable tools for exploring the past.” Regardless of the auction’s result, we probably can no longer separate the rare document from this historical moment. Somehow, 17,437 people engraved their willingness into the U.S. Constitution’s path.

One now goes to bed asking what comes next?

Some users rather take a vote than have their contribution back, hoping for more possibilities, and have shared many big ideas, from contributing to organizations to using the space to pay off students loans, and so much more. Many suggestions come as innocent jokes, but that was exactly how this whole project started.