I regularly cite data about Europe’s sub-par economic outcomes in hopes of driving home the point that the United States should not copy that continent’s approach of onerous fiscal burdens.

Which is now a very relevant topic with Biden pushing for a big expansion of the welfare state.

This is not a good idea. Americans are richer than their counterparts on the other side of the Atlantic. Even more remarkably, lower-income people in the United States often have living standards

equal to – or even greater than – middle-income Europeans.

Another way of making this point is to compare economic outcomes in American states compared to European countries.

I first did that back in 2015, citing data to show that all be the very-richest European nations would be considered poor if they were part of the United States.

I want to augment that comparison today. I’m motivated by a National Review column by Charles Cooke. As a former European, he realizes it would be a mistake for the United States to copy European policies.

Schrager writes, “Americans can’t spend like they used to. Store shelves are emptying, and it can take months to find a car, refrigerator or sofa. If this continues, we may need to learn to do without — and, horrors, live more like the Europeans.

That actually might not be a bad thing.” Counterpoint: Yes, it would. …having spent a great deal of time in both places, I can assure you that it is considerably easier to live in America than it is to live in Europe, and that one of the main reasons for that — beyond Americans’ being so stonkingly rich — is that Americans are far, far more demanding of their marketplaces. …We do not, under any circumstances, need to “learn to do without.”

I want to focus on the “stonkingly rich” part of the above excerpt.

Cooke links to a 2014 column in the Washington Post by Hunter Schwarz. Here are the key passages.

If Britain were to join the United States, it would be the second-poorest state, behind Alabama and ahead of Mississippi. The ranking, determined by Fraser Nelson, an editor of The Spectator magazine,

was made by dividing the gross domestic product of each state by its population, and it  took into account purchasing power parity for cost of living. Several other European countries were also included… Norway was the top European country on the list, between Massachusetts and New Jersey.

Here’s the Nelson data, which shows that only oil-rich Norway and pro-market Switzerland look good.

Some readers may be questioning the use of numbers from 2014 and 2015.

That’s a reasonable suspicion since perhaps European countries have closed the gap over the past few years.

But that’s not the case. The United States has grown faster in recent years, so updated state/country numbers would make Europe look even worse.

Here are those comparisons, showing again that European countries would be viewed as poor if they were states. 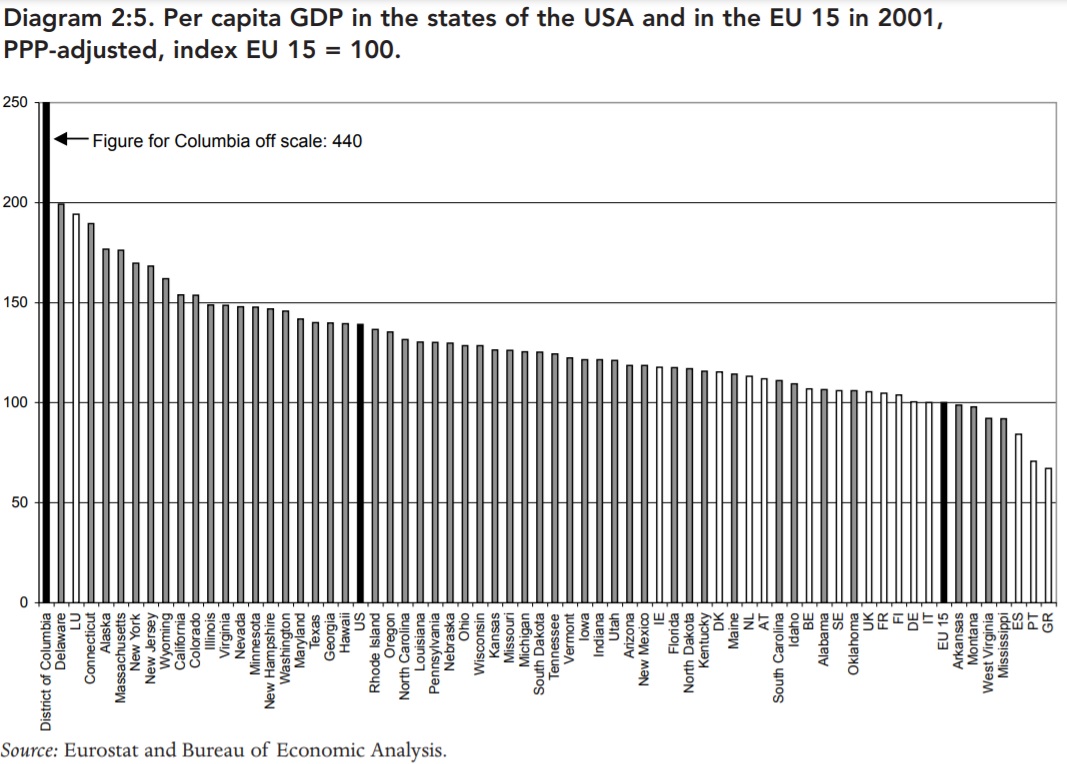 P.P.S. After a period of “convergence” after World War II, European countries have actually been falling further behind the United States in recent decades. Needless to say, it’s not good to be part of the “anti-convergence club.”