The excitement and enthusiasm surrounding the launch of the Proshares Bitcoin Strategy ETF (BITO) last week was evidenced by its massive trading volume and the positive sentiment it created which propelled the value of Bitcoin (BTC) to new all-time highs.  Some of this was warranted as BITO, being the first U.S. exchange listed BTC futures ETF further legitimizes the crypto currency as a viable asset class that is here to stay.

On its first day of trading BITO traded over 25 million shares and saw over a $1 billion of turnover. During its first week the fund has gathered over $500 million of assets under management (AUM), both records for an ETF.

I have nothing against BTC, I’m long term bullish and own some myself, but I strongly suggest avoiding buying BITO.  Put simply, it is a terrible way to get exposure to BTC.

The crux of the problem is the BITO is backed by futures contracts, not actual BTC.  As a futures based vehicle it must execute “rolls”, that is sell some near term contracts while buying longer term futures to maintain a constant ‘snapshot’ to represent the current price of the underlying BTC.

Futures contracts contracts have a term structure, that is later dated expirations can trade at a discount or premium to the near term expirations. What determines whether later dates trade at a premium, called contango, or a discount, are various inputs ranging from interest rates, the carrying costs, such as storage, and market sentiment.

Some futures backed ETFs can swing between contango and backwardation depending on market conditions.  One of the best known and most popular ETFS, the Barclay’s S&P 500 VIX ETF (VXX) typically trades in cantago as the further out in time the greater the probability of a large move. But when stock market volatility increases (read as large sell-offs) it moves to backwardation as investors rush for short-term protection while expecting things to normalize over time.

But the normal term structure for the VXX is cantago and this has the effect driving the price of VXX down over time. Why? Because VXX has to continually roll or renew futures contracts it holds which means it is typically selling near term contracts at a discount to the higher priced later dated futures.

This is what it looks like when you are constantly selling low and buying the high: 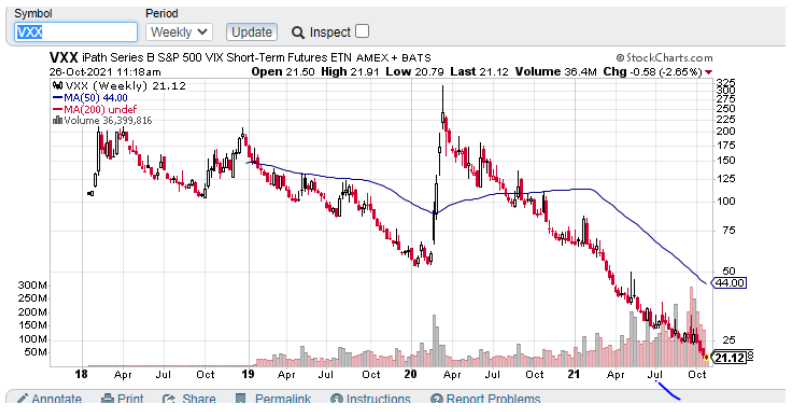 The cantago bleed or cost of rolling the VXX, which has over a decade of history, has averaged 7.5% per year.

Obviously BITO doesn’t yet have the historical data but by all indications its normal term structure will be one of contango, which means it will be subject to the bleed or cost of rolling.

The extent of this cost varies among derivative analysts but falls within the range of 5% to as high as 17% annually.  Assuming it’s towards the middle or around 8% per year this means, all else being equal BITO will lose 40% of its value after 5 years.

One of the reasons contributing to BITO’s contango conundrum is that the CME exchange, on which it trades, has placed contract limits of 2,000 contracts of the first two months.  Ironically, the popularity of BITO has caused it to already reach those limits which means BITO needs to buy even longer dated futures at even higher prices exacerbating the cost of cantago.

Over time the positions limits could increase and institutional investors will figure out a way to arbitrage the steepness of cantago to a flatter term structure but it will still have a negative tracking error.

Bitcoin has a bright future and BITO gives people ease of access but it comes with too high a cost. A physically backed Bitcoin ETF will be the future, not ETFs backed by futures.

The post Why I’m Bearish on BITO, the New Bitcoin ETF appeared first on Option Sensei.