One of the my favorite publications from the Tax Foundation is the annual International Tax Competitiveness Index (here’s what I wrote in 2020 and 2019).

The 2021 Index, authored by Daniel Bunn and Elke Asen, has now been released, and you can see that Estonia has the most sensible policy.

Other Baltic nations also are highly ranked, as are Switzerland and New Zealand. 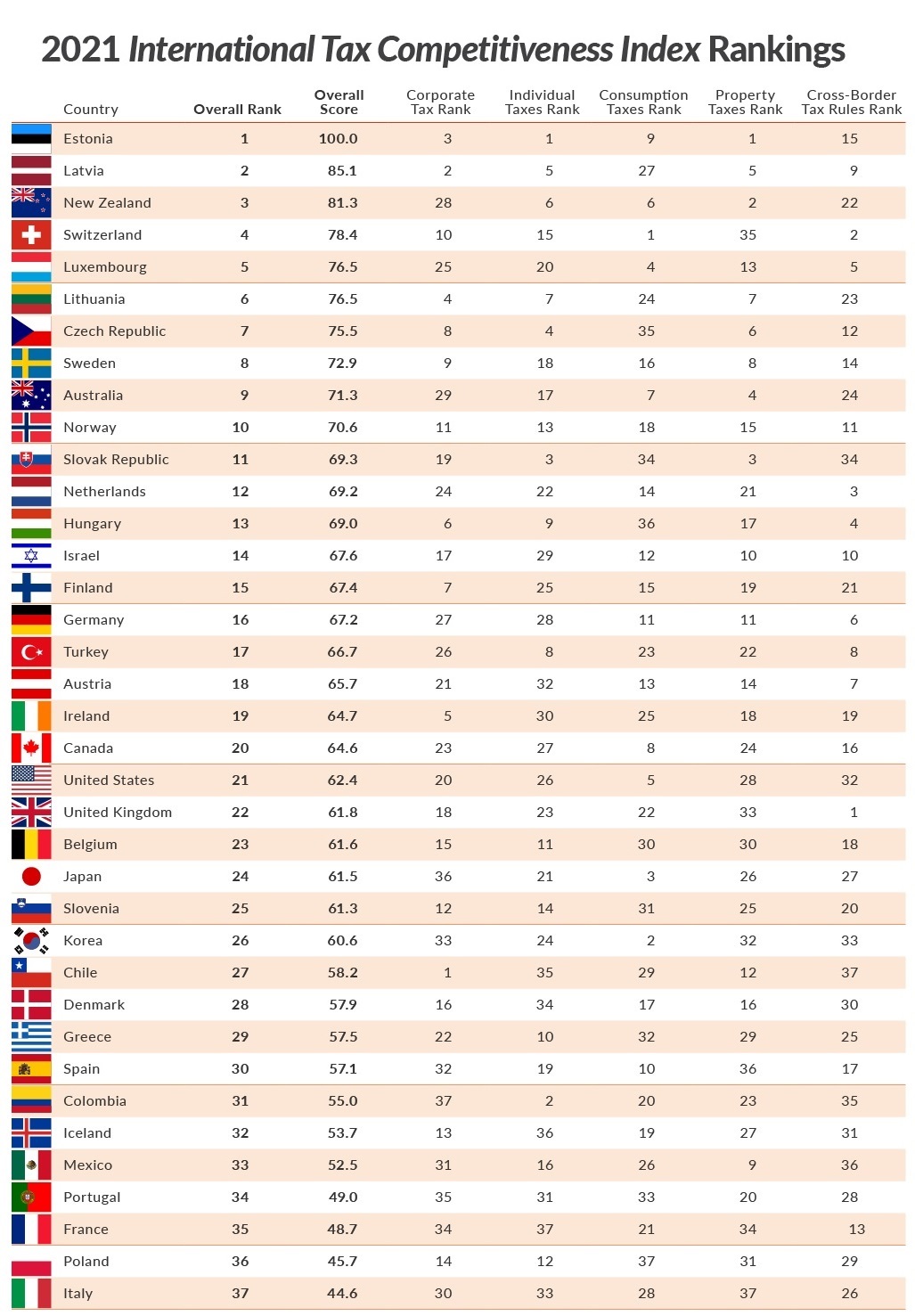 It’s probably no surprise to see nations such as France and Italy score so poorly, but Poland is a bit of a surprise.

Since most readers are from the United States, let’s specifically look at America’s rankings.

The U.S. does very will on consumption taxes (ranked #5), largely because we haven’t made the mistake of adding a value-added tax to our system.

By contrast, the U.S. is near the bottom (ranked #32) with regard to cross-border tax rules, though at least America is no longer in last place in that category, as was the case back in 2014.

Here are some additional details for the folks who like to get in the weeds. 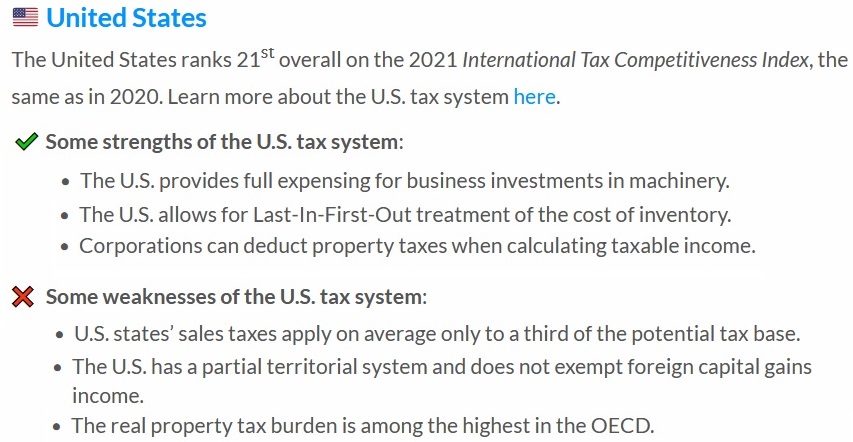 The Tax Foundation also released a companion article looking at which nations have enjoyed the biggest improvements or suffered the biggest declines since the Index first began back in 2014.

The United States has been a big winner thanks to the 2017 tax reform, but Israel wins the prize by jumping all the way from #28 to #14. 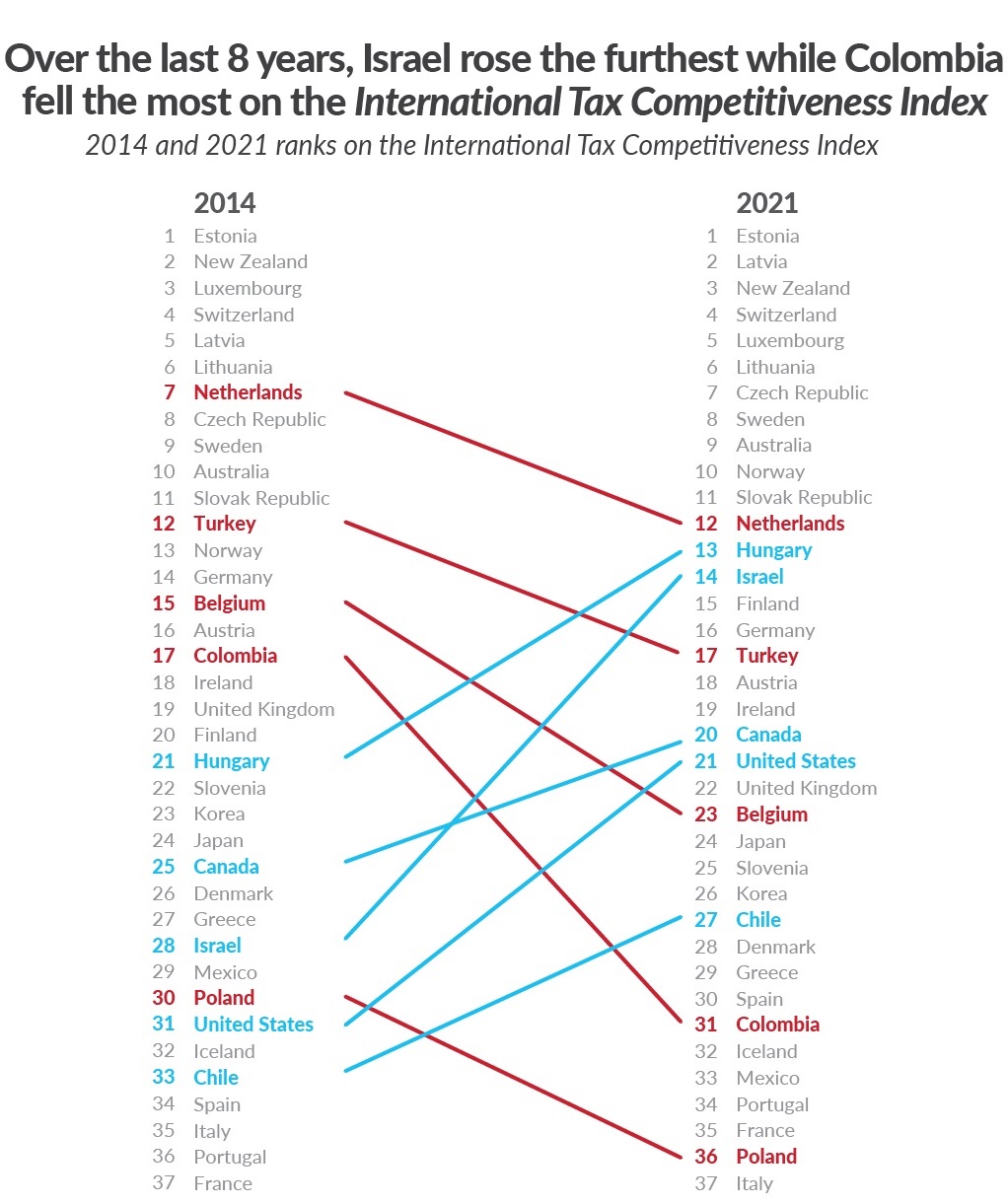 Colombia has the dubious honor of suffering the biggest decline.

Makes me wonder whether joining the pro-tax OECD (a process that began in 2013) played a role in the country’s shift in the wrong direction.

I’ll close with the sad observation that America’s progress will be reversed if Biden’s class-warfare tax plan is enacted. Earlier this year, the Tax Foundation estimated that the President’s plan would cause the United States to drop eight spots.

Call me crazy, but I don’t understand why folks on the left want the U.S. tax system to be more like Italy’s.

P.S. I would like to see the aggregate tax burden added as one of the variables in the Index, and it also would be interesting if more jurisdictions were included (zero-tax jurisdictions such as Bermuda and the Cayman Islands presumably would beat out Estonia, and it also would be interesting to see where anti-market nations such as China got ranked).

nextChina and US trade barbs over future of Taiwan