The Biden Administration’s approach to tax policy is awful, as documented here, here, here, and here.

We’ve now reached the stage where bad ideas are being turned into legislation. Today’s analysis looks at what the House Ways & Means Committee (the one in charge of tax policy) has unveiled. Let’s call this the Biden-Pelosi plan.

And we’re going to use some great research from the Tax Foundation to provide a visual summary of what’s happening.

We’ll start with a very depressing look at the decline in American competitiveness if the proposal becomes law (the good news is that we’ll still be ahead of Greece!). 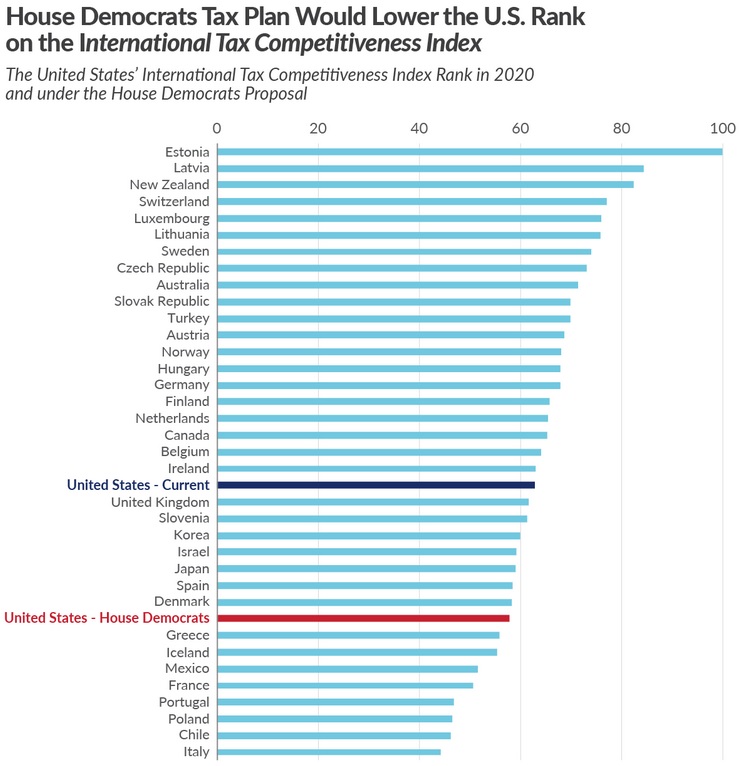 Next, let’s look at the Tax Foundation’s map of capital gains tax rates if the plan is approved.

Unsurprisingly, this form of double taxation will be especially severe in California. 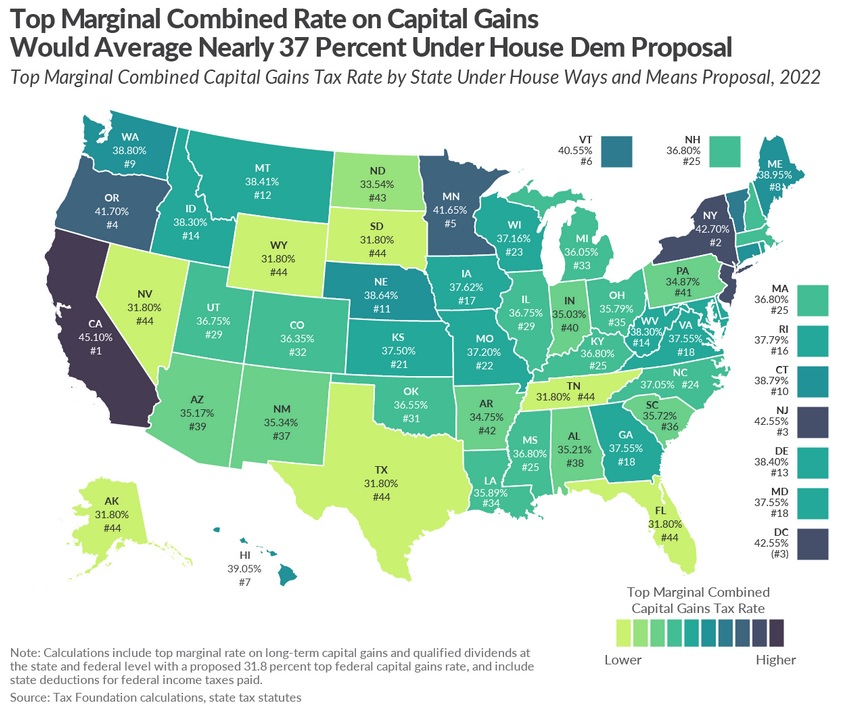 Our third visual is good news (at least relatively speaking).

Biden wanted the U.S. to have the developed world’s highest corporate tax rate. But the plan from the House of Representatives would “only” put America in third place. 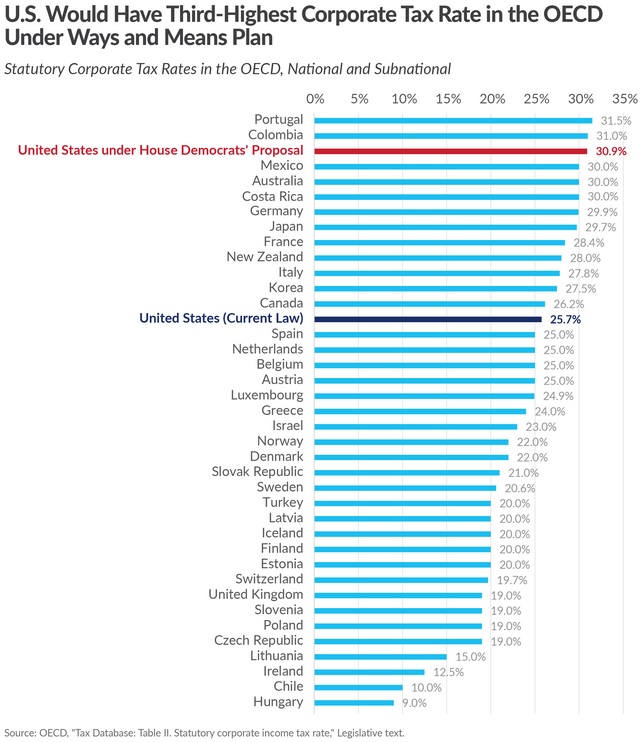 Here’s another map, in this case looking at tax rates on non-corporate businesses (small businesses and other entities that get taxed by the 1040 form).

This is not good news for America’s entrepreneurs. Especially the ones unfortunate enough to do business in New York. 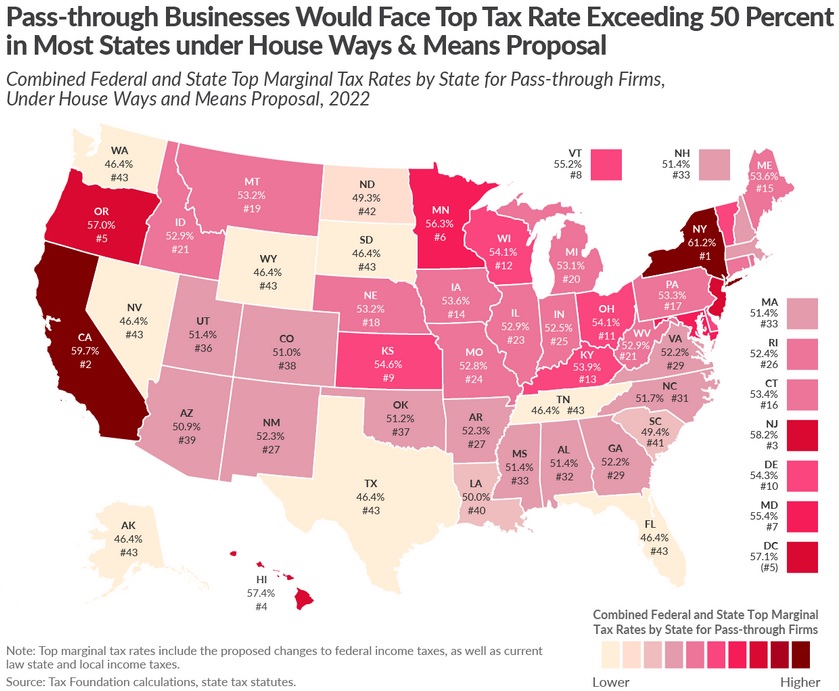 Last but not least, here’s the Tax Foundation’s estimate of what will happen to the economy if the Biden-Pelosi tax plan is imposed on the nation. 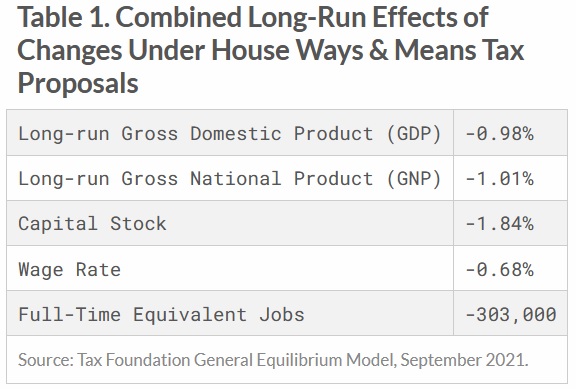 There are two things to understand about these depressing growth numbers.

One final point. In part because of the weaker economy (i.e., a Laffer Curve effect), the Tax Foundation also estimated that the Biden-Pelosi tax plan will generate only $804 billion over the next 10 years.

P.S. Here’s some background for those who are not political wonks. Biden proposed a budget with his preferred set of tax increases and spending increases. But, in America’s political system (based on separation of powers), both the House and Senate get to decide what they like and don’t like. And even though the Democrats control both chambers of Congress, they are not obligated to rubber stamp what Biden proposed. The House will have a plan, the Senate will have a plan, and they’ll ultimately have to agree on a joint proposal (with White House involvement, of course). The same process took place when Republicans did their tax bill in 2017.

P.P.S. It’s unclear whether the Senate will make things better or worse. The Chairman of the Senate Finance Committee, Ron Wyden, has some very bad ideas about capital gains taxation and politicians such as Elizabeth Warren are big proponents of a wealth tax.