When I discuss class-warfare tax policy, I want people to understand deadweight loss, which is the term for the economic output that is lost when high tax rates discourage work, saving, investment, and entrepreneurship. 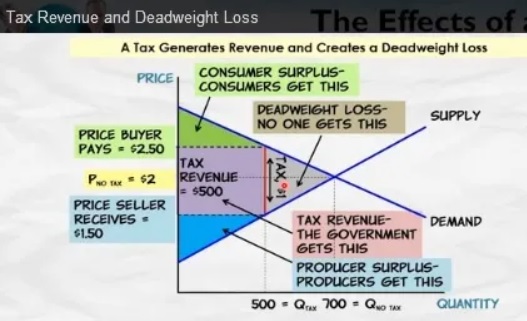 But all of this analysis requires a firm grasp of supply-and-demand curves. And most people never learned basic microeconomics, or they forgot the day after they took their exam for Economics 101.

So when I give speeches about the economics of tax policy, I generally forgo technical analysis and instead appeal to common sense.

Part of that often includes showing an image of a “philoso-raptor” pondering whether the principle that applies to tobacco taxation also applies to taxes on work.

Almost everyone gets the point, especially when I point out that politicians explicitly say they want higher taxes on cigarettes because they want less smoking.

Unfortunately, these common-sense observations don’t have much impact on politicians in Washington. Joe Biden and Democrats in Congress are pushing a huge package of punitive tax increases.

Should they succeed, all taxpayers will suffer. But some will suffer more than others. In an article for CNBC, Robert Frank documents what Biden’s tax increase will mean for residents of high-tax states.

Top earners in New York City could face a combined city, state and federal income tax rate of 61.2%, according to plans being proposed by Democrats in the House of Representatives. The plans being proposed include a 3% surtax on taxpayers earning more than $5 million a year.

You don’t have to be a wild-eyed “supply-sider” to recognize that Biden’s tax plan will hurt prosperity.

After all, investors, entrepreneurs, business owners, and other successful taxpayers will have much less incentive to earn and report income when they only get to keep about 40 cents out of every $1 they earn.

Folks on the left claim that punitive tax rates are necessary for “fairness,” yet the United States already has the developed world’s most “progressive” tax system.

I’ll close with the observation that the punitive tax rates being considered will generate less revenue than projected.

Why? Because households and businesses will have big incentives to use clever lawyers and accountants to protect their income.

P.S. Tax rates were dramatically lowered in the United States during the Reagan years, a policy that boosted the economy and led to more revenues from the rich. Biden now wants to run that experiment in reverse, so don’t expect positive results.

P.P.S. Though if folks on the left are primarily motivated by envy, then presumably they don’t care about real-world outcomes.

nextOnline Startup Investing Is the Future