This post Into The Graveyard of Empires appeared first on Daily Reckoning.

“Love is like war,” said Henry Louis Mencken — “easy to begin but very hard to stop.”

After 20 loving years, the United States has walked out on Afghanistan.

The Taliban is already squiring the lovelorn around Kabul. Matrimony… holy or unholy… is imminent.

Have you looked at the television?

Afghans are so hot for the Taliban’s hug they are smuggling themselves into the wheel wells of United States Air Force transport planes — with frightful consequences. 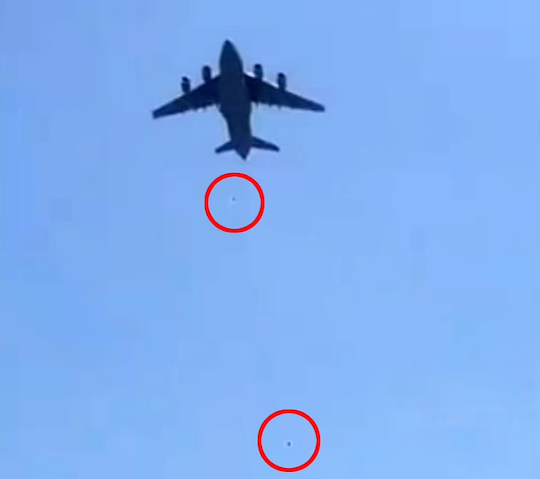 But the stars had always crossed this unlikely dalliance. The thing was doomed before the first kiss.

As we have written before:

Americans are a restless, fitful people. We are eternally on the jump. We are forever hunting the fresh adventure, the next chance.

We are perpetually peeking over the next hill.

That is, Americans are poor imperialists. We simply lack the patience the business demands.

And the patience required to tame and police an Afghanistan would have taxed old Job beyond all human endurance… and worn the soul clear out of him.

Afghanistan is less a nation than a sort of Asian West Virginia. It is a badland of warring McCoys and Hatfields.

Will they ever come to terms… and clasp hands?

The lion and the lamb will first clasp hands.

“You Americans have the watches,” said the Taliban. “But we have the time.”

The Taliban Didn’t Need to Win… to Win

The Taliban did not need a victory. They merely needed to avoid a defeat.

They were the hopeless prizefighter matched against the great champion.

Their strategy was to waltz around the ring for all 12 scheduled rounds, to frustrate their pursuer… and tie him up in clinches when cornered.

That is, their central ambition was not to deliver a blow — but to avoid a blow.

They wagered the fellow would tire of the chase eventually… throw up the sponge… and climb out of the ring.

They wagered accurately. And they are presently collecting a fantastic purse.

The American reputation is absorbing a severe trouncing.

The scene here is the United States embassy in Saigon. The year is 1975: 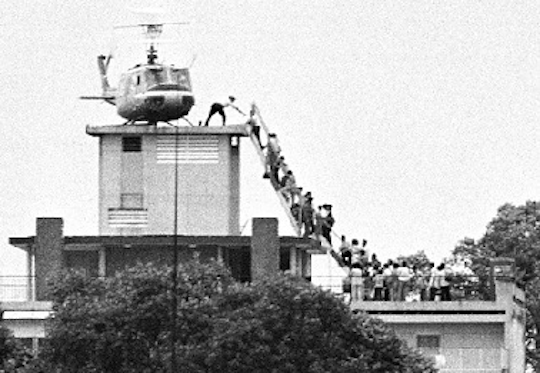 The scene here is the Hamid Karzai International Airport, Kabul. The year is 2021: 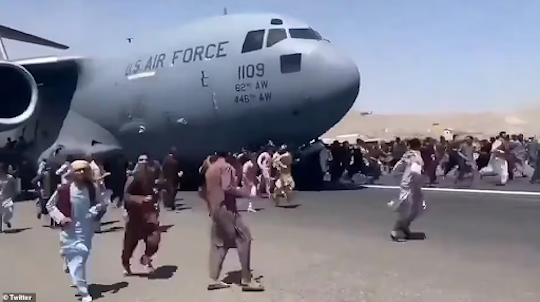 The aircraft is moving… incidentally. These desperates are frantic to climb in nonetheless.

Who Will Trust the United States?

What about America’s allies? Will they trust it to brawl alongside them in case of a fight?

They have seen these images. They have tracked the news. Neither the images nor the news instills confidence in American resolve.

In the 1870s, the German government would not accept American bonds — “even if signed by an angel in heaven,” as one fellow styled it.

And a Washington-based politician at that?

Why should an ally trust the pledges of the United States government to fight for them?

Perhaps it is time these allies pursued alternate defense arrangements.

And perhaps the United States should take them off its hook… and let them go their independent ways.

We hazard Mr. Putin is having a good hard belly laugh this day.

It was in Afghanistan that the Soviet Empire came to grief — in part because of American arms handed to its Afghan foes.

Now the United States has taken the licking. How has it come to pass?

The route to Kabul is long. And it is packed with twists…

Going Abroad in Search of Monsters

But the once modest American Republic took up the hunt at the end of the 19th century.

It found its first monster, a sad caricature of a monster, in Spain.

As we have quipped before: Americans remembered the Maine. And forgot their Adams.

They have been forgetting their Adams ever since…

America has gone buccaneering around the globe. It has chased down monsters during WWI, WWII, Korea, Vietnam, Iraq — twice — and Afghanistan.

For every evil it scotched, another rose in its place. Hitler shouldered the Kaiser out of the way. Stalin, Hitler.

21 years ago, America was undisputed heavyweight champion of Earth.

Its fleets commanded the Seven Seas, its armies policed the four corners of the globe.

It was the Pax Americana.

But the gods, they are a jealous lot. They will abide no mortal that has outgrown its britches.

They will abide no hubris…

So they hatched a plot. They enlisted zanies to fly airplanes into New York’s two identical towers — and Virginia’s Pentagon — on Sept. 11, 2001.

President George Herbert Walker Bush rose to the bait. He ordered his men into Afghanistan.

The gods proceeded to place their feet upon the table… settle in for the show… and munch buttered popcorn.

They knew there is a reason why Afghanistan is labeled “the graveyard of empires.”

They set the same trap for Alexander the Great over 2,000 years ago. Afghanistan was his ruin.

They coaxed in Great Britain in the 19th century. Afghan warriors gave these British a savage, savage trouncing.

The wrathful gods gave the godless Soviet Union a divine Afghan lesson during the 1980s.

And now… in 2021… these gods have brought low their latest target — the United States.

The graveyard of empires has another head marker. 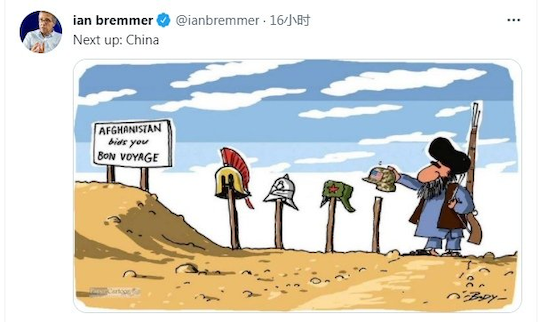 Note the caption atop the image — “Next up: China.”

Is China next up? We do not know the answer. Yet we do know they… like Russia… enjoy razzing the United States over Afghanistan.

Here the editor of Beijing mouthpiece The Global Times gives a good ribbing: 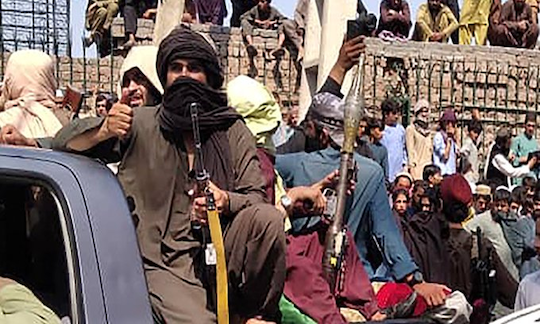 And she is having a very rough go of things. Her name is being blackened.

Thus our head drops in sorrow.

“Empires have a logic of their own,” our co-founders Bill Bonner and Addison Wiggin wrote in Empire of Debt, concluding:

“That they will end in grief is a foregone conclusion.”

It would appear so. But as we have also written before:

If the American empire is ending in grief, we hope for a quiet grief, a whimpering grief… not a shrieking grief.

The post Into The Graveyard of Empires appeared first on Daily Reckoning.

nextChina Mocks US Over Biden's Afghanistan Failure, Uses It to Undermine Confidence With Our Allies