Rapidly Growing Bitcoin of America Expands Its Territory Into Tennessee

Bitcoin vs. Altcoins: A Lopsided Battle

Following a recent decline to lows of $490, ETH has been rallying higher daily, with it now breaking above $600 for the second time in the past week.

The last break above this level was fleeting and only allowed it to climb as high as $620. Where the market trends in the mid-term will depend largely on the cryptocurrency’s continued reaction to the resistance within its current price region.

One trader believes that $800 is next, noting that serious upside could be imminent in the days and weeks ahead.

At the time of writing, Ethereum is trading up just under 5% at its current price of $601, which marks a massive surge from its recent lows of $490 that were set late last week.

The strength seen in the time since these lows were set does indicate that this is a full-fledged bull market and that further upside is likely imminent in the days and weeks ahead.

While sharing his thoughts on where Ethereum might trend in the mid-term, one trader explained that he expects the cryptocurrency to see a move up towards $800 in the near-term.

To justify this possibility, he notes that the break above $600 marked the final key resistance level before his upside target.

“ETH looking so bullish on the weekly. Basically no resistance until $800.” 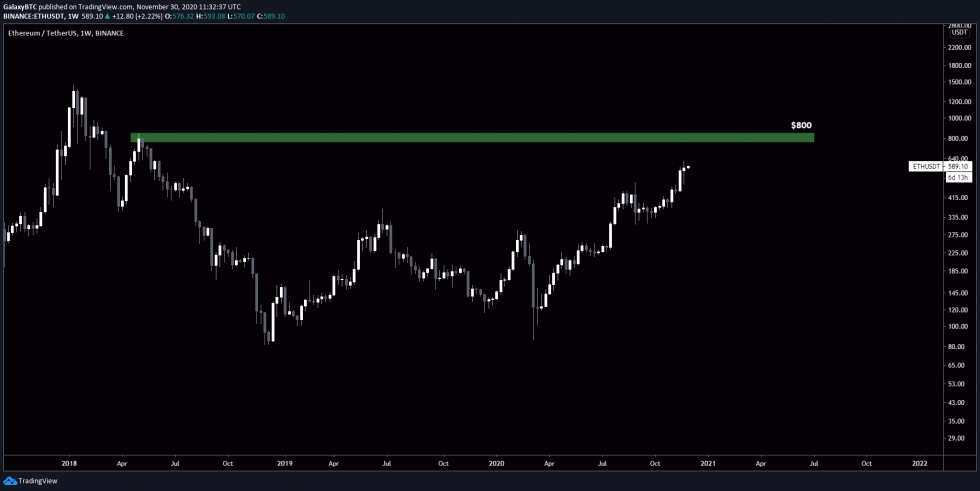 So long as Bitcoin remains steady above $19,000, Ethereum’s current momentum will likely persist and allow the aggregated market to move significantly higher.