Ethereum has strongly outperformed Bitcoin over the past few months. The leading altcoin has pushed higher on the back of an influx of buying demand due to trends in the decentralized finance space, along with investors realizing that it was relatively undervalued to BTC.

This rally allowed the Ethereum-to-Bitcoin pair to push higher, meaning that each ETH bought users more BTC. The pair gained around 70% from the lows of June to the highs in August.

While some think that this performance is a precursor to a macro rally where Ethereum will begin to encroach on Bitcoin’s market share, short-term downside is expected.

One crypto-asset trader recently noted that the asset is not looking good against Bitcoin due to the formation of “consistent lower lows and lower highs.” This trend suggests that the coin will soon plunge by 10-20% against Bitcoin:

“ethbtc defo does not look pretty, consistent lower lows and lower highs, ie downtrend. I think ethbtc is the canary in the coal mine for alt performance over the next few weeks and it doesn’t look promising at this point =S 27k-28k sats looks like good support imo.”

The analyst who shared this chart and prediction is the same one that in the middle of 2018 predicted that Bitcoin would bottom at $3,200. He was proven almost exactly correct just months later when the cryptocurrency reached an ultimate low of $3,150 on leading spot exchanges. He has also called short-term price trends to good accuracy. 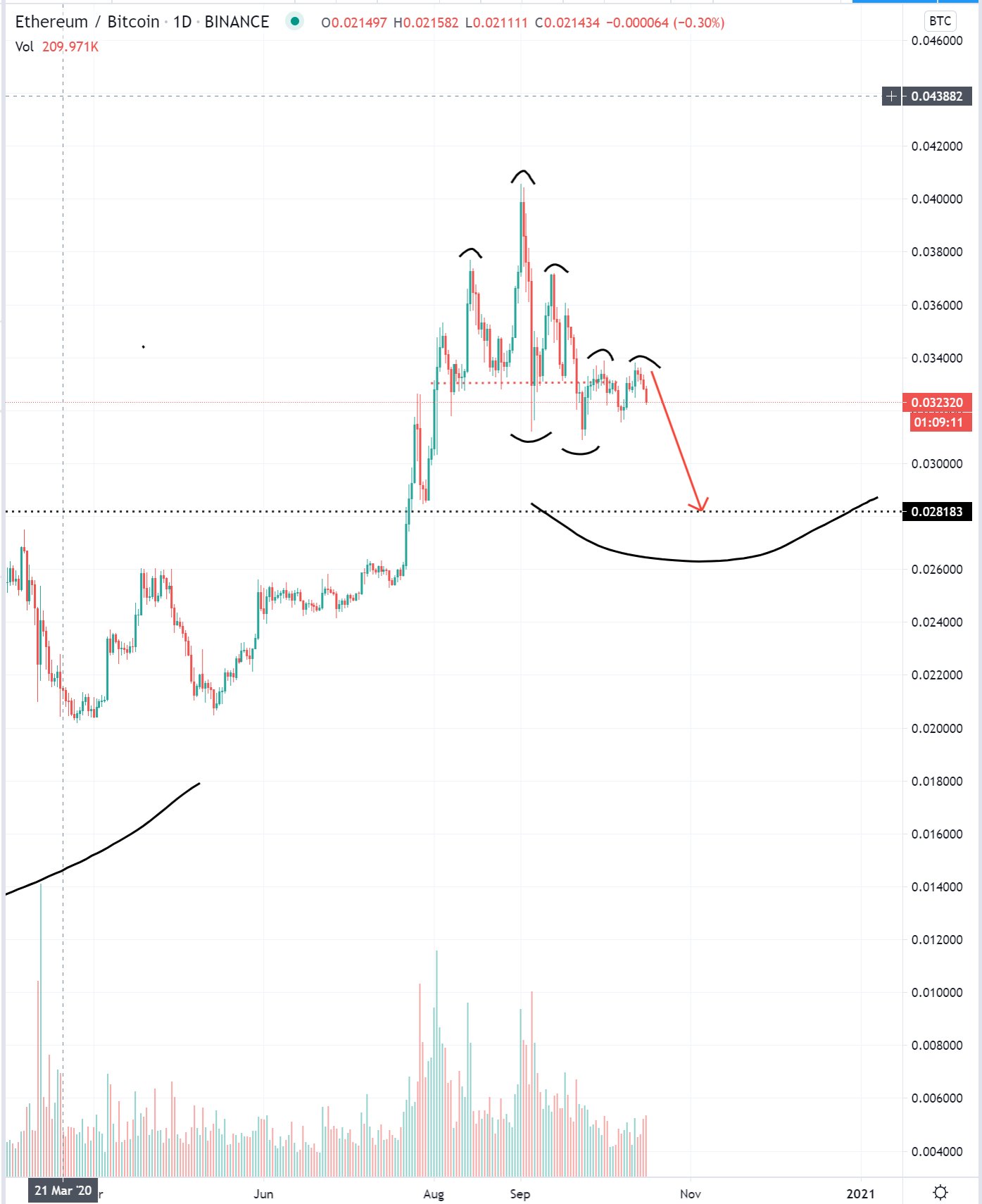 It’s also worth noting that others think that Ethereum is done outperforming Bitcoin for the time being.

The crypto-asset analyst that predicted ETH would seriously outperform Bitcoin heading into late July and August recently said that the coin is likely done for now. He said that the era of ETH/BTC pushing higher is presumably finished or the time being.

Spencer Noon, head of DTC Capital, asserts that Ethereum’s fundamentals are strong despite recent weakness in the market for the underlying ETH coin.

He noted that Ethereum now “dwarfs Bitcoin” in daily total fees paid due to the growth in the DeFi space. In fact, 115 million contract calls by ETH addresses in September alone has allowed the miner fee metric to inflate to current levels.

With infrastructure booming and scaling solutions in the works, Ethereum investors have many reasons to be excited.

nextStepping Back from the Brink