France and Germany Lock Down as Second Coronavirus Wave Grows, is the US Next?

Philadelphia in Crisis: At Least 30 Cops Injured During Riots

Michigan again expected to be a key battleground

Michigan represented one of President Donald Trump’s closest victories in 2016. And one of his most important. The Great Lakes State again is expected to be a key battleground this time around (Sept. 18)

Six states above all others have emerged as the top electoral prizes in the 2020 race for president.

Three are Great Lakes battlegrounds that Donald Trump carried four years ago by less than a percentage point: Wisconsin, Michigan and Pennsylvania.

And three are Sunbelt battlegrounds where Trump’s 2016 margins were a little bigger: Arizona, Florida and North Carolina. 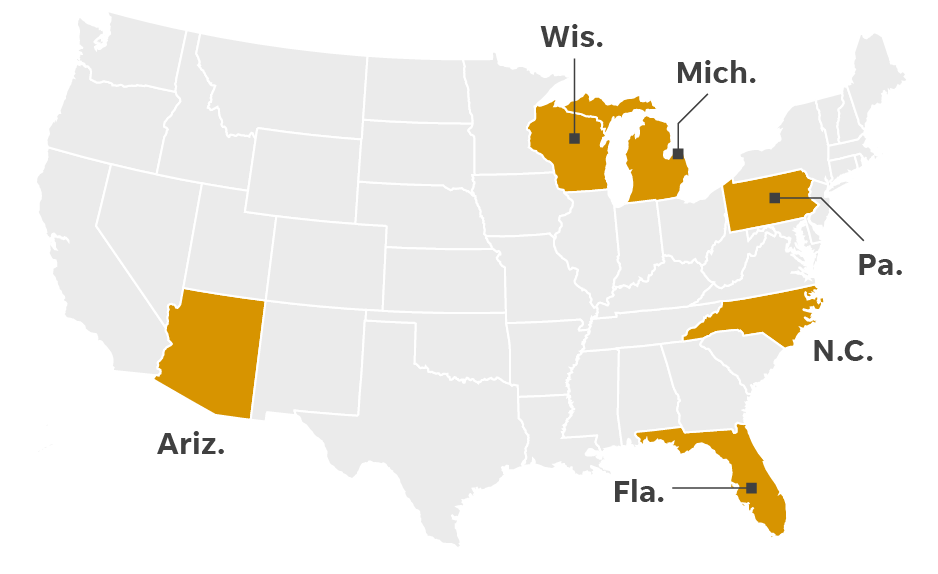 They represent 101 of the 270 electoral votes needed to win the White House. In all likelihood, Republican Trump or Democrat Joe Biden will have to win at least three of them to capture an electoral majority.

These aren’t the only battlegrounds in 2020. But their size and competitiveness has made them the states most likely to decide the presidency.

Between April and August, these six accounted for all of top 20 media markets in the presidential ad wars.

In their make-up, they showcase the great dividing lines in American politics (race, education, urban-suburban-rural) and the key demographic groups that will shape the outcome.

Biden needs to win Michigan to beat Trump. These regions are key to a 2020 election victory

For Biden to beat Trump, he’ll likely need to take back Michigan, a state that has been more supportive of Democrats than others in the Rust Belt.

Breaking down where the polls stand for the election in Michigan

Detroit Free Press Washington correspondent Todd Spangler breaks down where the polls stand in Michigan a little more than 5 weeks from the election.

For Joe Biden to beat President Donald Trump, he’ll likely need to take back Michigan, a state that historically has been more supportive of Democrats than most others in the Rust Belt.

No state won by Trump in 2016 was closer than Michigan, where Trump beat Hillary Clinton by a mere 10,704 votes — or about two-tenths of 1%. His path to the White House was forged by breaking through the traditionally Democratic “blue wall” of Michigan, Pennsylvania and Wisconsin.

It was close in all three states. But as former first lady Michelle Obama said at the Democratic convention, Trump’s win in Michigan amounted to a difference of only about two votes for every precinct in the state.

Polling data suggests Biden has a good chance in Michigan and other factors, including law enforcement’s foiling of an alleged plot to kidnap Democratic Gov. Gretchen Whitmer, may help Democrats as well heading into the final weeks of the race. Whitmer has argued that Trump’s refusal to unequivocally denounce right-wing hate groups made him “complicit” in the alleged attempt, while Trump, rather than simply denouncing the plot, called the popular governor “terrible” instead.

But whether Biden is ultimately victorious here will hinge on geography, voter demographics and higher turnout than four years ago.

If Biden wins Detroit, the state’s largest city, by margins like those enjoyed by President Barack Obama in 2008 and 2012, he’ll win the state and its 16 Electoral College votes, all else being equal. Even if that doesn’t happen, suburbanites in metro Detroit, thousands of whom sat out the ’16 election, could swoop in and give Biden the victory.

But Michigan also has a larger percentage of whites without college degrees than most other swing states, and they are key Trump supporters. If he can find more voters in older industrial and rural areas to add to his base or drive higher levels of support in traditionally Republican west Michigan, he could eke out another win.

Headed into the final weeks of the campaign, both sides recognize Michigan as a key battleground. After weeks of being off the air in Michigan, the Trump campaign in late summer ramped up its efforts, blasting Biden for supporting the North American Free Trade Agreement in the ‘90s and saying his own policies have spurred economic growth. And while there have been reports that…

nextWhen ancient Greece experienced their own ‘2020’…