5 Actions to Avoid July 4th Weekend Amid the Coronavirus Pandemic

How Close are We to a COVID-19 Vaccine?

President Trump early Monday morning defended his Saturday night comment about asking “my people” to ease back on coronavirus testing because an increase in testing leads to an increase in positive results.

Trump in a rally in Tulsa, Okla., on Saturday night touted his administration’s response to the coronavirus crisis. As he addressed what he called a “phenomenal” job by himself — an assessment critics dispute — the president lamented that as the nation has increased the availability of coronavirus tests, a higher gross number of tests are coming back positive.

While aides said he was joking about scaling back tests, the comments led to harsh backlash, which Trump addressed on Twitter Monday.

“Our Coronavirus testing is so much greater (25 million tests) and so much more advanced, that it makes us look like we have more cases, especially proportionally, than other countries,” Trump tweeted, apparently trying to underscore the serious message behind comments White House Trade Adviser Peter Navarro said were “tongue in cheek” on CNN Sunday.

Our Coronavirus testing is so much greater (25 million tests) and so much more advanced, that it makes us look like we have more cases, especially proportionally, than other countries. My message on that is very clear!

51.9K people are talking about this

Trump added: “My message on that is very clear!”

The president, as he made the apparently sarcastic comments Saturday, changed the tone of his voice and waved his arms around.

“You know, testing is a double-edged sword. We’ve tested now 25 million people,” Trump said at the rally. “Here’s the bad part. When you test when you do testing, to that extent, you’re going to find more people. You’re gonna find more cases.

“So I said to my people, slow the testing down, please,” Trump continued. “They test and they test. We had tests that people don’t know what’s going on. … We got another one over here. The young man’s 10 years old. He’s got the sniffles. He’ll recover in about 15 minutes. That’s a case.”

The comments became their own story out of the whirlwind and controversial rally. Time, for example, ran a story headlined, “At Tulsa Rally, Trump Suggests U.S. Slow Down Coronavirus Testing to Avoid Bad Statistics.”

But Trump has mentioned in the past that the more people test positive for the coronavirus, the worse it makes the crisis look, despite the fact that experts have said a robust testing system is necessary for the nation to fully get back to normal in the wake of the pandemic. And his administration has been largely behind the push to quickly increase testing capacity in the U.S. as part of what Trump called a “phenomenal” response to the crisis.

“I can’t believe I have to say this, but we should be speeding up testing — not slowing it down,” presumptive Democratic presidential nominee Joe Biden said in a tweet Sunday which included a campaign ad criticizing Trump for the comments.

I can’t believe I have to say this, but we should be speeding up testing — not slowing it down. 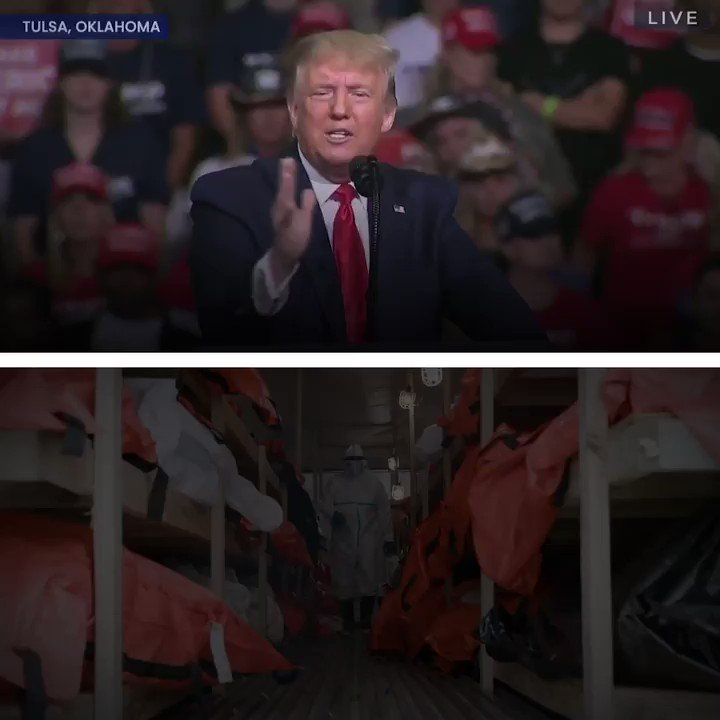 35.2K people are talking about this

“We need more tests. Now,” the ad says as it fades to black.