COVID-19 mutation may be evolving to bypass mask-wearing, hand-washing

Trump lashes out at Cindy McCain after she endorses Biden

The Iowa Democratic Party (IDP) still has not reported official vote totals in the critical Iowa Caucuses as of early Tuesday morning, in a largely unexplained and unprecedented delay that has raised questions about the legitimacy of the contest — and Democratic campaign officials are livid, Fox News has learned.

The Trump campaign, meanwhile, openly suggested that the delay meant that the caucuses were being “rigged,” and that the embarrassing night proved that the Democratic Party can’t be trusted to run Americans’ health care and implement sweeping new government programs. Even if a winner were ultimately announced, the chaos and confusion has seemingly erased any hope for the major momentum boost that would normally result.

“We found inconsistencies in the reporting of three sets of results,” the IDP said in a statement at 11:30 p.m. EST. “In addition to the tech systems being used to tabulate results, we are also using photos of results and a paper trail to validate that all results match and ensure that we have confidence and accuracy in the numbers we report. This is simply a reporting issue. The app did not go down and this is not a hack or an intrusion. The underlying data and paper trail is sound and will simply take time to further report the results.”

Fox News is told that during an initial conference call with the campaigns, an IDP representative said the party would be “getting photos of the paper results sent over,” but didn’t answer any questions and then hung up on all the campaigns, even as frustrated staffers pushed for answers. A campaign staffer told Fox News the IDP’s brief call was “crazy.”

Another campaign official told Fox News, “Yes, they did hang up.”

During a second, equally contentious conference call early Tuesday morning, the IDP reportedly informed campaigns they could expect results sometime later on Tuesday, but gave no information about how the results would be verified or when precisely they would be published. (The 2016 Iowa caucus tallies were provided on the same day of voting, with more than 90 percent of precincts reporting by 11:00 p.m. ET that year.)

Speaking on a brief call with reporters at approximately 1:10 a.m. ET on Tuesday that lasted a little over a minute, the IDP said the system to validate electoral results was taking longer than expected, but that there had been no hack or intrusion. The IDP did not specify a precise time for results to post on Tuesday.

Former Vice President Joe Biden’s campaign wrote to the IDP late Tuesday, complaining about the “considerable flaws” in the caucus reporting process. Biden, who arrived in New Hampshire early Tuesday, appeared to be dramatically underperforming at several precincts in Iowa throughout the night.

The Democrat Caucus is an unmitigated disaster. Nothing works, just like they ran the Country. Remember the 5 Billion Dollar Obamacare Website, that should have cost 2% of that. The only person that can claim a very big victory in Iowa last night is “Trump”.

35.5K people are talking about this

“The app that was intended to relay Caucus results to the Party failed; the Party’s back-up telephonic reporting system likewise has failed,” the campaign wrote in a letter. “Now, we understand that Caucus Chairs are attempting to — and, in many cases, failing to — report results telephonically to the Party. These acute failures are occurring statewide. We appreciate that you plan to brief the campaigns momentarily on these issues, and we plan to participate. However, we believe that the campaigns deserve full explanations and relevant information regarding the methods of quality control you are employing, and an opportunity to respond, before any official results are released.”

“With every passing minute that there is a delay, we worry that the process will lose credibility.”

About an hour earlier, IDP spokesperson Mandy McClure said in a statement, “The integrity of the results is paramount. We have experienced a delay in the results due to quality checks and the fact that the IDP is reporting out three data sets for the first time. What we know right now is that around 25% of precincts have reported, and early data indicates turnout is on pace for 2016.”

However, the turnout in the 2016 Democratic caucuses in Iowa was only 171,109. That was far below the nearly 240,000 that took part in the 2008 Democratic caucuses, when then-Sen. Barack Obama won the contest — indicating that Democrats’ high hopes for enthusiasm have not panned out.

“With every passing minute that there is a delay, we worry that the process will lose credibility,” a top Elizabeth Warren aide told CNN.

1,186 people are talking about this

Former 2020 presidential contender Julian Castro tweeted: “This is a total mess. I respect the people of Iowa, they’ve been great—but it’s become very clear that our democracy has been misserved by a broken system.”

The void of information allowed campaigns to spin the results in their favor. Former South Bend, Ind., Mayor Pete Buttigieg even said he was “victorious” early Tuesday and that Iowa had “shocked the nation,” claiming the campaign’s internal numbers showed he had pulled ahead.

“Seventy-seven percent of our precinct captains have reported results from their caucuses,” a Buttigieg aide told Fox News, noting that previous projections “had the race at a virtual tie on state delegate equivalents, but from the 77 percent of reported precincts, we’re performing 8 points better than our projections.”

Did Pete Buttigieg just claim victory in Iowa when the results haven’t been announced yet?

4,893 people are talking about this

The aide added: “We believe we’re on our way to winning the SDE [State Delegate Equivalent] count. In the 1,301 precincts our precinct captains have reported, Pete reached viability in 1,064 (83 percent). For additional context, turnout returned to historical norms and we expect participation rates to wind up near 2016 levels. We found that our support in rural parts of the state was ~5 percent better than we expected (coming in at 28 percent so far.)”

Former presidiential candidate Marianne Williamson remarked incredulously from the sidelines, “Did Pete Buttigieg just claim victory in Iowa when the results haven’t been announced yet?”

Vermont Sen. Bernie Sanders went rogue, and released internal data that his campaign said represented vote totals 40 percent of precincts. The figures, which indicated Sanders was winning with a narrow lead over Buttigieg, were also unverified.

In a surreal moment shortly before Minnesota Sen. Amy Klobuchar took the stage at her Iowa headquarters to thank her supporters – even as no voting results were available – a precinct chief was being interviewed on CNN while he was on hold for more than an hour with the IDP to report results.

The IDP then hung up on the precinct chief live on-air after he took too long to respond once they took him off hold.

Unreal. A precinct secretary was on hold on the hotline for an hour and they took him off hold as he was talking to CNN. He didn’t respond fast enough and they hung up on him. 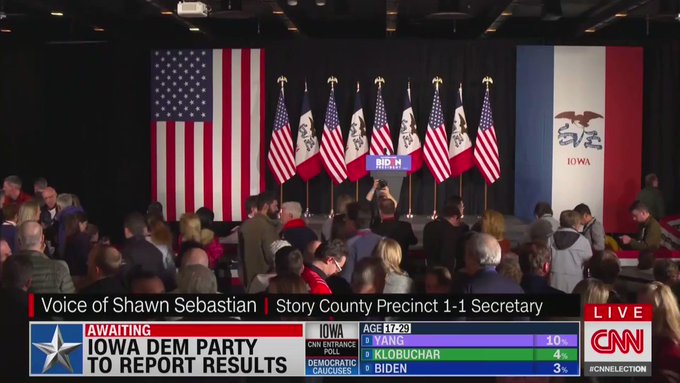 413 people are talking about this

At least four precincts had to resolve ties in their vote results by flipping a coin during the evening, Fox News has learned.

Speaking at 11:30 p.m. EST, Biden said he felt good about the caucus, then remarked, “So it’s on to New Hampshire, Nevada, South Carolina, and well beyond. We’re in this for the long haul.”

“I want to thank the Iowans that are here,” Biden said. “Well, the Democratic Party is working to get this result to get it straight. And I want to make sure they’re very careful in their deliberations. … We’re gonna walk out of here with our share of delegates. We don’t know exactly what it is yet, but we feel good about where we are.”

Taking the microphone 10 minutes later, Sanders said that when the results were in, he had a “good feeling we’re going to be doing very very well here in Iowa.”

Nearing midnight local time, the bar at Sanders headquarters was packed and the crowd had not thinned at all.

Buttigieg and Warren tie. Coin toss about to happen

2,010 people are talking about this

Klobuchar’s team, for their part, sounded its own note of optimism.

“Big night in Iowa,” Klobuchar campaign chairman Justin Buoen wrote on Twitter. “With the numbers we’ve seen internally and publicly, we’re running even or ahead of Vice President Biden. Wheels up to New Hampshire!”

Before voting began, the IDP had announced that for the first time ever, it would report three sets of results at the end of the state’s first-in-the-nation caucuses: a tally of caucus-goers’ initial candidate preference; vote totals from the “final alignment” after supporters of lower-ranking candidates were able to make a second choice, and the total number of State Delegate Equivalents each candidate receives. There was no guarantee that all three will show the same winner.

By the end of the night, it became clear that there was no guarantee there would be any winner at all.

For three years, we’ve been preparing for the process that officially kicks off tonight in Iowa: the Democratic presidential primary. Today our chair, @TomPerez, reflects on the reforms we’ve made to make this the most transparent primary in our history: https://bit.ly/2SgkWDX

428 people are talking about this

In social media posts, the Democratic National Committee (DNC) had boasted that it had been “preparing” for the Iowa process “for three years” to make the primary process “the most transparent” ever.

As the situation broke down minute by minute, the Trump campaign mocked the delay on Twitter, even as it celebrated the huge crowds at GOP caucuses in the state that showed up to vote for the president.

Big WIN for us in Iowa tonight. Thank you!

37.4K people are talking about this

“Democrats are stewing in a caucus mess of their own creation with the sloppiest train wreck in history,” Parscale said in a statement just after midnight. “It would be natural for people to doubt the fairness of the process. And these are the people who want to run our entire health care system?”

For his part, with just hours to go until his State of the Union address Tuesday night, Trump tweeted…

nextCrypto Cybersecurity Threats Down 78% in H2 2019