Warren Buffett famously said “Our favorite holding period is forever,” and it’s good advice. Periodically reviewing your stocks is wise, but ultimately we’re looking for companies whose shares we can buy and hold for the ultra-long term — even as long as 50 years.

Personally, 50 years pushes me well beyond retirement age. Then again, life expectancy for men in the U.S. increased 13% over the past 50 years, so maybe I should be planning for a longer retirement anyway.

That’s not the only thing that has changed over the last 50 years. During this time, personal computers entered nearly every household, the internet connected the world, and we all walk around holding smartphones with capabilities that would’ve stretched credulity even 15 years ago.

Conceding that much can change in 50 years, I expect that United Rentals (NYSE:URI), Tyson Foods (NYSE:TSN), and Mastercard (NYSE:MA) will all still be alive and thriving a half-century from now.

As long as we keep building stuff

United Rentals isn’t a household name, but maybe it should be. The equipment company makes the bulk of its revenue through rentals for both residential and nonresidential construction projects. But it also opportunistically sells aging equipment when market prices are favorable. While that might not sound like an earth-shattering business, the stock recently traded at about $160, from around $10 a share in January 2010, making it a top-10 stock over the past decade. 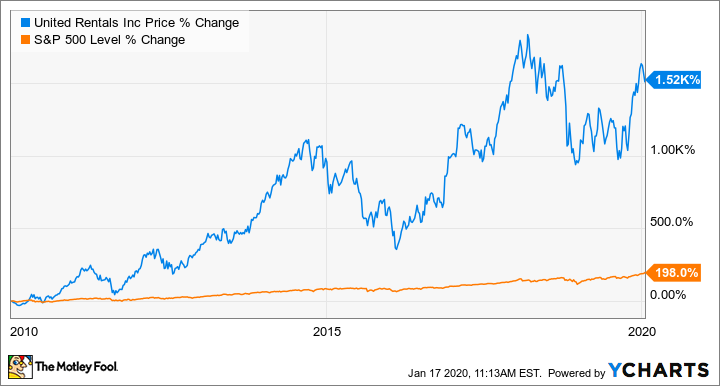 There’s reason to think it can continue beating the market from here. The equipment rental market is highly fragmented. United Rentals claims to be the largest equipment rental company in the country, but it only has 13% market share. That leaves plenty of room for growth via expansion and acquisitions. In the third quarter of 2019, 11% of the company’s 15% rental revenue growth was attributable to the acquisitions of BlueLine Rental and BakerCorp.

United Rentals uses strong free cash flow ($1.1 billion through three quarters in 2019) and debt to fund acquisitions like these. These two acquisitions alone cost the company nearly $3 billion. But it also repurchases a lot of its stock — outstanding shares are down 7% year over year.

Construction projects aren’t ever going away. As long as renting equipment makes more sense than buying, I expect this company to be fine. Despite double-digit revenue and earnings growth, it only trades at 8 times forward earnings. These are all reasons I recently added it to my IRA.

As long as we keep eating stuff

Unlike United Rentals, Tyson Foods needs no introduction. The food titan has four business segments: beef, pork, chicken, and prepared foods like its Jimmy Dean brand. Excluding acquisitions and tax law changes, revenue and net income were essentially flat from 2018 to 2019. But the company is becoming a steady dividend player, raising it annually over the last five years. While the dividend yield is still under 2%, the payout ratio is only 27%, which means future annual increases are likely. 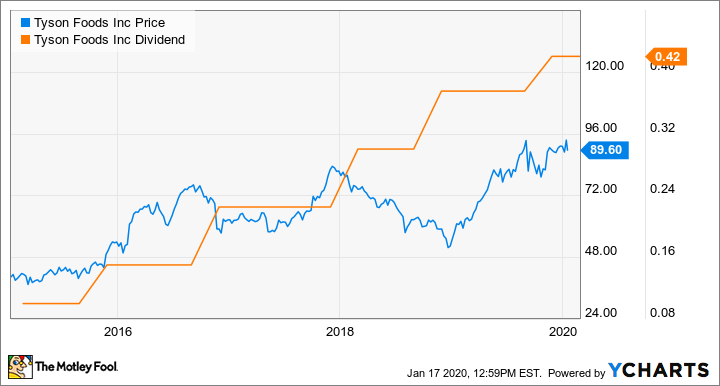 One specific reason that now may be a great time to buy Tyson is the U.S. and China signing off on phase one of a trade deal. Under the deal, China agrees to purchase around $200 billion of U.S. goods.

The deal includes $32 billion in agricultural goods over the next two years, with pork cited specifically. That’s logical since China is struggling with its domestic pork production. Tyson already exports to China, meaning it could be a major beneficiary of the trade deal.

Another reason to like this company long term is…

Continue reading at THE MOTLEY FOOL