This post About What I Said in NYC Last Thursday… appeared first on Daily Reckoning.

As I mentioned in one of my issues last week, I attended the first annual Paradigm Press summit in New York City and gave a talk to both live attendees and thousands of additional investors with streaming access to the event.

The entire event was terrific with eye-opening insights from many additional presenters – Jim Rickards, Nomi Prins, Tim Sykes, Ray Kurzweil, George Gilder, Grant Cardone, Robert and Kim Kioyasaki… I mean the list goes on and on.

But for my part, I talked about two very important concepts. One of them was the secretive insurance-related investment I alluded to last week.

The other was the idea of trading “new” stocks for “old” ones at this point in the market cycle.

In a nutshell, my big-picture point is that investors are currently fixated with big-hype names while simultaneously ignoring the older (more profitable) versions of the very same companies.

One example I highlighted?

To Infinity and BYND?

I’m sure you’ve heard of this “fake meat” company, which makes plant-based alternatives to everything from ground beef to sausage.

Now, look, there’s no doubt that many people are adopting healthier lifestyles.

There’s no doubt that the company’s products are great for what they are (though I would argue they aren’t actually healthy at all).

And there’s no doubt that Beyond Meat has quickly gained national attention and shelf space everywhere from groceries to fast food restaurants.

But as Brian Rose and I told a bunch of paying subscribers back in June, the action in Beyond Meat’s stock wasn’t making any sense at all.

Out with the New in with the Old

After an oversubscribed pre-IPO, the offering price of the shares ended up getting raised to $25.

Then, when they finally hit the market in May, the first trade took place at $46.

And by the time our alert was going out, they had soared past $160.

Here’s the chart from the actual issue: 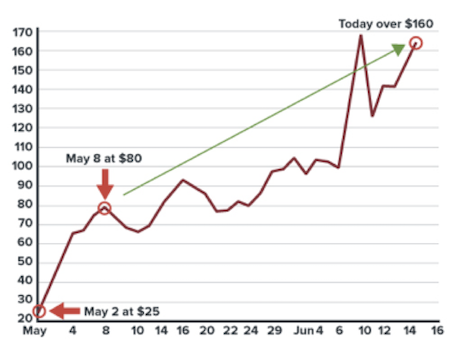 Obviously, that massive rally was great news for anyone who got in early.

But as we said, it didn’t look sustainable or justified at all.

So we told readers to get out if they were in and labeled the stock way overvalued.

At the same time, we pointed to Tyson Foods (TSN) as a much better alternative for several reasons, including:

In fact, on that latter point: We mentioned that Tyson had actually been an early investor in Beyond and also owned many additional stakes in other “fake meat” startup companies.

For a few weeks, we looked pretty dumb as Beyond Meat kept climbing higher … all the way up to the $230 a share level.

As you can see, Beyond absolutely cratered after that final blow-off top.

All told, it’s about half of what it was when we issued our warning back in June and off about 65% from it’s all-time high.

Anyone who got out in time banked an awful lot of profits before it was too late. And anyone who bought put options or shorted the stock made an absolute killing.

But I tell you this story, just as I told it in NYC, for a very important reason…

It’s an extreme example – both in its magnitude and its accelerated timeline – of what I see in many corners of the markets right now.

There is a lot of hype being tossed around companies with hot names, charismatic CEOs, cool business ideas, and other buzzy type stuff.

Meanwhile, some of these same companies have no real long-term competitive advantages … they have very shaky finances … most often, they have zero earnings and are paying zero income to their shareholders.

In contrast, old “boring” names are being written off entirely. Companies that are very profitable. That pay big dividends. That, in many cases, are directly competing with the red-hot stocks that are wildly overvalued.

I don’t have room here to go into all of the specific examples that I shared with my live audience.

Suffice it to say that I’ve seen this whole movie before, back when I was working on Wall Street in the late 1990s and early 2000s.

I know exactly what happens when the tide goes out and the bottoms of the ships are exposed.

I also know how quickly that change can happen…

So my recommendation at this point is starting to take a closer look at what companies you’re currently investing in, how strong their underlying financials and businesses are, and how exposed they might be to any economic hiccup or other unforeseen speedbump.

At the same time, I also suggest looking to some of the widely-ignored, deeply undervalued bargains lurking out there in plain view.

To a richer life,

The post About What I Said in NYC Last Thursday… appeared first on Daily Reckoning.

nextCaught in the Crossfire Hurricane Crosshairs: An Interview With Svetlana Lokhova, Part 1 - The Setup