During a rally Monday evening in Lexington, Kentucky, President Donald Trump urged his fans to go out and vote for incumbent Gov. Matt Bevin (R), warning them that a high-profile loss in a state he won by 30 points in 2016 “sends a really bad message” and pleading, “you can’t let that happen to me!”

Well, that “bad message” was sent. Though Bevin has not conceded the race as of Wednesday morning, with all of the precincts reporting, he appears to have lost to Democratic Attorney General Andy Beshear by just over 5,000 votes.

As it became clear that Bevin was headed for defeat on Tuesday evening, footage of Trump’s comments from the night before went viral.

Here’s Trump saying at his rally in Kentucky last night that Matt Bevin losing “sends a really bad message” and pleading with his fans, “you can’t let that happen to me!” 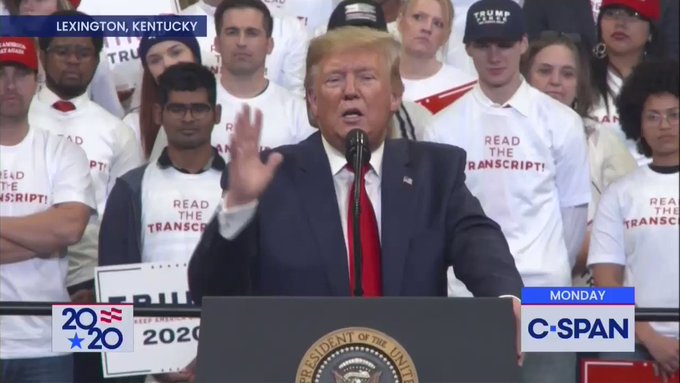 7,664 people are talking about this

Trump, as he is in the habit of doing, responded to Bevin’s loss with brazen gaslighting. Though the most recent Kentucky poll showed Bevin leading by five points, Trump tweeted without evidence that Bevin “picked up at least 15 points in last days, but perhaps not enough (Fake News will blame Trump!).” He touted Republican victories in down-ballot races and the fact that a Republican won the gubernatorial race in deep-red Mississippi (while ignoring Democrats flipping both the state House and Senate in Virginia).

#ElectionNight Won 5 out of 6 elections in Kentucky, including 5 great candidates that I spoke for and introduced last night. @MattBevin picked up at least 15 points in last days, but perhaps not enough (Fake News will blame Trump!). Winning in Mississippi Governor race!

20.3K people are talking about this

Later, Trump went even further and claimed, again without evidence, that Bevin may have picked up as many as 20 points in the polls thanks to his Lexington rally.

Our big Kentucky Rally on Monday night had a massive impact on all of the races. The increase in Governors race was at least 15 points, and maybe 20! Will be in Louisiana for @EddieRispone on Wednesday night. Big Rally!

20.2K people are talking about this

(To be generous to Trump, one relatively unreliable pollster did have Beshear leading Bevin by a considerable margin in the weeks heading into the election. But reputable pollsters had the race at basically a dead heat.)

Republican National Committee Chair Ronna McDaniel echoed Trump’s talking point in a tweet where she claimed Bevin “was down 17 points” and that “[n]o one energizes our base like” Trump. An RNC spokesperson told Aaron Blake of the Washington Post that the number McDaniel cited is based on “internal data from earlier in the year.” (McDaniel posted a similarly dubious tweet about Trump’s purported impact on the Mississippi gubernatorial race.)

The Trump campaign, meanwhile, released a statement claiming that Trump “just about dragged Gov. Matt Bevin across the finish line.” It’s true that Bevin worked hard to nationalize the race, tying himself to the president’s policies and rhetoric in an attempt to overcome his own unpopularity in the state, as my colleague Tara Golshan explained. That may have helped him make gains over the last six months. But Trump’s election-eve appearance in Kentucky — one in which he appeared on stage with Kentucky GOP superstars Senate Majority Leader Mitch Connell and Sen. Rand Paul — was not enough to carry him on Election Day.

Trump is in the habit of making outrageous claims about his impact on races in red districts in states. In September, for instance, he responded to Republican Dan Bishop’s win by about 2 percentage points in a special election for a congressional seat in a deep red North Carolina district (that Republicans have held since 1963) by tweeting that Bishop “was down 17 points 3 weeks ago” before he appealed to Trump for help.

Dan Bishop was down 17 points 3 weeks ago. He then asked me for help, we changed his strategy together, and he ran a great race. Big Rally last night. Now it looks like he is going to win. @CNN & @MSNBC are moving their big studio equipment and talent out. Stay tuned!

16.2K people are talking about this

But, similar to Bevin’s race, pre-election polling showed that Bishop’s race was basically a dead heat. His victory was not the comeback story that Trump wanted to take credit for. And the Bevin and Bishop cases are far from isolated instances. As I’ve detailed, Trump has a long history of using election results — even when Republicans lose — to glorify himself.

In speech to Republican Congressional Campaign Committee, Trump takes credit for Saccone not losing by more votes than he did last week in Pennsylvania.

“We went in there, they were down – good man, Rick Saccone, didn’t quite make it, but think of it — lost by about 300 votes” 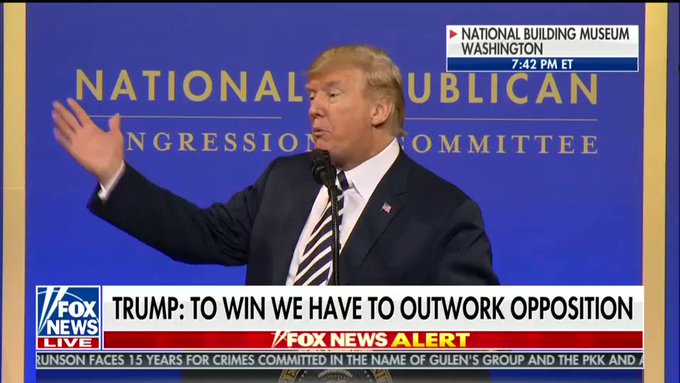 24 people are talking about this

Bevin’s defeat isn’t good news for Trump, but it’s perhaps even worse news for Senate Majority Leader McConnell, who, like the president, is on the ballot next year. While Bevin’s 34 percent approval rating made him one of the most unpopular governors in the country heading into Tuesday night, McConnell’s approval rating in Kentucky is even lower (24.3 percent, according to RealClearPolitics’s polling average). It will be more difficult for Democrats to win in Kentucky in a year when both McConnell and Trump are on the ballot, but Bevin’s defeat indicates McConnell is at least in for a competitive reelection contest.

Trump on Wednesday morning tweeted that…

previousSurviving on Bitcoin for a Day: Influencer Ryan Trahan Does a Test Ride