I’ve got an urgent announcement for you today.

One that will help you claim your fair share of a $940 billion pile of cash scheduled to be paid to Americans.

No, this has nothing to do with Trump’s State of the Union Address last night.

In fact, this cash isn’t tied to Washington at all! (Except for the fact that much of this cash was freed up because of legislation passed in late 2017).

The only issue is that you have to act quickly before this cash is doled out to someone else.

So I’m hoping that today, you’ll pay close attention to this alert and make sure you position yourself to claim your portion of this monumental amount of cash being distributed this year.

There are an estimated 328,164,639 people living in America as I write to you.1 By the time you read this alert, the number will certainly be higher.

I pulled up the U.S. population because I wanted to see how far the $940 billion in cash would go.

It turns out, if everyone shared the cash equally, the total amount paid to each person would be $2,864.42. So almost $3k to every man, woman and child in the country.

Unfortunately, the payments won’t be sent out equally to everyone. Because the majority of Americans have no idea these cash payments have even been scheduled. (And this is good news for you, because with fewer people claiming their share of the payments, your portion of the cash could be even bigger.)

So where is this cash coming from?

It’s currently sitting squarely in the bank accounts of corporations across America.

But it’s not going to stay there. Because shareholders are increasingly demanding that companies return this cash to its rightful owners. The investors in each individual company.

That’s you and me!

But if you want to be one of the millions of investors who participate in this cash give-back program, you have to know where to be invested.

This year, companies in the S&P 500 are expected to spend a record $3 trillion in cash.

The cash is currently being held on company balance sheets due in a large part to a lower tax rate for corporations, and a special incentive for companies with international operations to bring cash back to the United States.

The majority of this cash is being spent on business initiatives. Things like new facilities, hiring more workers, and paying larger wages. These payments certainly help our economy and have been a big contributor to the healthy job market.

But much of this cash is being paid back to investors through share buyback programs. And this year, companies will spend a record $940 billion on these programs. 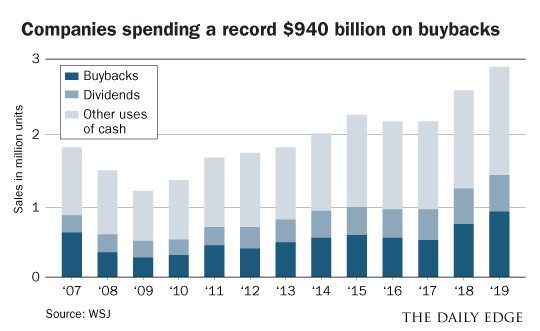 So how does a share buyback program put cash in your wallet?

When a company uses its cash to buy back shares, the number of outstanding shares held by other investors decreases. The shares being bought by the company are retired and they basically no longer exist.

Moving forward, when the company earns a profit from its normal business, the profit can now be split between fewer shares. So each share will now receive a larger portion of the profits.

Plus, when a company is buying back its shares, the buying pressure naturally pushes the stock price higher.

So short-term traders benefit when companies buy back shares simply because the stock trades higher.

Don’t forget that when a company buys back shares, dividends are still paid to investors. Only now, there are fewer shares over which a company must divide its cash set aside for dividends. So in this environment, dividends naturally increase, giving you even more income!

I’m excited about the $940 billion in buybacks and the hundreds of billions to be spent on dividends as well!

The key to collecting your share of this cash being spent is to invest in the companies with the biggest cash balances who have announced large share buyback programs and dividend hikes.

One of my favorite stocks in this category is Apple Inc. (AAPL).

The company generates more than $23 billion in cash each year, and currently holds more than $230 billion. Apple is actively buying back shares of stock, and spent $62.9 billion on shares in the second half of last year.

With shares trending lower in the fourth quarter, we’ve got an excellent opportunity to buy the stock at a discount. Meanwhile, the company’s own buyback program will be more effective as Apple can now retire more shares for every billion dollars in cash spent.

Apple, and plenty of other cash-rich corporations are giving you an excellent opportunity to collect from the $940 billion in buybacks this year. But don’t wait until this cash is spent before you tap into this opportunity!

Here’s to growing and protecting your wealth!

previousQuadrigaCX Gets Temporary Reprieve From Creditors as $180M ‘Floating Around’

nextWas the Godfather of Soul Murdered, Is Stoicism Possible Today, and Who Cares about Lying Novelists?